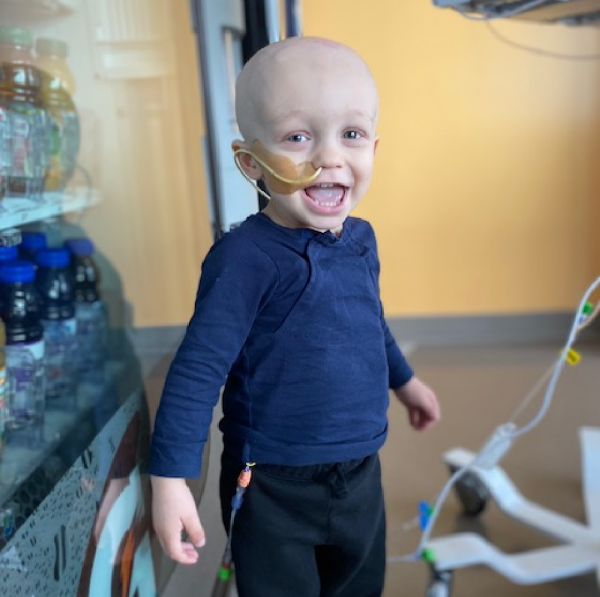 Thomas L. Harris V is the 1.5 year old cherished little boy of Thomas L. Harris IV "Lee" and Dr. Ashleigh Kussman. He is the center of his parents' universe and is the best Christmas gift they've ever received (Ashleigh found out she was pregnant with Thomas on Christmas Day 2018). He was a much desired gift, as Ashleigh, a childhood cancer survivor herself (high risk Acute Lymphoblastic Leukemia, a type of blood cancer) was told infertility could be a side effect of her life-saving chemotherapy treatments--and Lee and Ashleigh very much wanted to be parents.Thomas had been a very healthy and happy little boy for the largest part of his life prior to his diagnosis. A lover of music, especially songs with a good beat or the soothing voice of Christina Perri, dancing, and mandarin oranges, he has been full of energy and met all of his developmental milestones early or on time. He had experienced frequent spit ups since birth, which were attributed to "reflux," being a "happy spitter," and later "gastroparesis," a disorder in which the stomach moves food at a slower pace than it should, which can cause frequent spitting. Ashleigh's worst nightmare for future children has been brain tumors, as these seemed the most devastating to the patients and families for whom she cared in her training. Inspired by her own experience with childhood cancer, Ashleigh became a pediatrician and sought additional fellowship training to become a pediatric hematologist-oncologist. She is currently in her final year of training. She worried about a brain tumor early on for Thomas, but recognized she could be biased by her own work experiences and sought outside expert opinion on her son. Experts reassured her that clinically, he fit the diagnosis of gastroparesis, and Thomas was put on a medicine to help his stomach move food more quickly for 10 months prior to his diagnosis with cancer. Ashleigh knew her worst nightmare was her reality when on the morning of diagnosis at 16 months old, Thomas developed facial asymmetry when trying to smile at her, and when she put him down to follow her husband who walked out of the room, he was imbalanced and had trouble walking. He had been walking since 10.5 months old and running since 12 months old, so this was very alarming. The few weeks prior to his diagnosis, Thomas' parents noticed he was eating less and eating only certain foods, sleeping more, waking up from sleep more frequently crying, and having more "fussy" episodes. Consulting with physician colleagues and friends, these were easily explained away by normal toddler behavior of teething pain with erupting molars, "picky toddler eating" and "toddler tantrums."  Thomas was diagnosed with a supratentorial RELA fusion-positive ependymoma based off of genetic studies of his brain tumor. He underwent resection of his tumor in January 2021 and is currently being treated with an intense 6-month chemotherapy course after consultation with various multidisciplinary experts. The standard of care for these tumors tends to be surgical removal followed by brain radiation, however, because of his age and the large radiation field that would be required due to the large size of his brain tumor, the effects of radiation would be devastating. Thus, experts agreed on an intense chemotherapy regimen as the initial treatment. If his tumor recurs, radiation will be focused on a site of recurrence, which is hopefully a smaller area-- and hopefully if he has recurrence, he will be older and have less devastating effects of brain radiation.  As a high risk B-ALL survivor, Ashleigh has been driven to help children and their families who find themselves in this tragic circumstance of childhood cancer. As an adolescent fighting cancer, she keenly remembers the immediate harsh effects of chemotherapies on her own body, and that sadly, the treatments were not always effective for the friends she met in her own journey. As a childhood cancer survivor with long term side effects and a constant need for surveillance of ongoing long-term effects from the non-targeted treatments which saved her life (all of which are still used today), and a friend to many survivors with devastating and sadly fatal long-term side effects, she is interested in the field of stem cell transplantation and cellular therapy. Cellular therapy holds the potential for more targeted therapies of cancers, and may be used in combination with other chemotherapies to be more effective in fighting childhood cancers. They may eventually also allow the use of smaller doses of chemotherapy to cure children's cancers, which could decrease the incidence of serious and life-threatening long-term side effects of treatment. She pursued research in Dean Lee MD, PhD's laboratory in fellowship to further investigate the role of natural killer cells in fighting various types of pediatric cancer. She recognizes the need for more pediatric cancer research to develop more effective and targeted treatments for kids, so that more can survive and survive with fewer serious and life-threatening side effects. Brain cancers have surpassed Acute Lymphoblastic Leukemia as the number one cancer-cause of death in children. The diagnosis of brain cancers is made even more difficult by a variety of non-specific symptoms which can be explained away by many benign conditions. It is often not until tumors have grown much larger and caused more specific symptoms, like facial asymmetry, abnormalities of eye movements, clumsiness, or weakness, combined with the less specific symptoms of spitting up/vomiting and headaches , that a diagnosis of a brain tumor is made. We desperately need funding for research for pediatric cancers to find more life-saving and targeted treatments. Thank you for supporting me and the more than 300,000 kids worldwide who will be diagnosed with cancer this year. By sharing the gifts of your time, talent and money with the St. Baldrick’s Foundation, you're supporting research to give all kids with cancer a better chance for a cure.