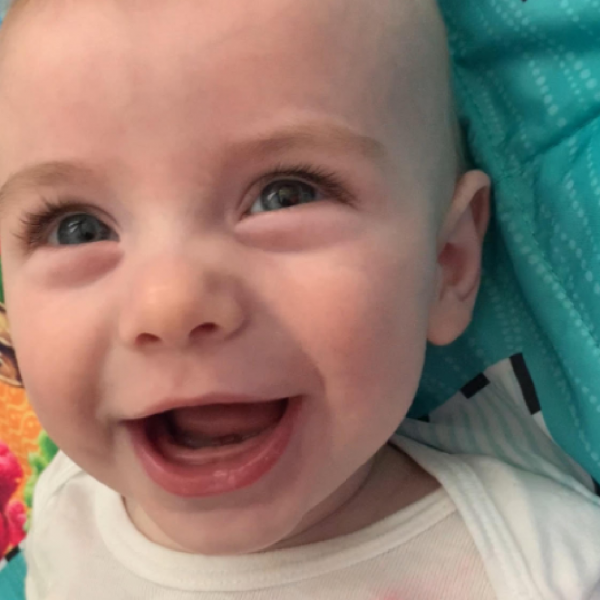 Luke is the happiest baby and has the biggest smile. He loves being outside, playing peek-a-boo, and watching whatever his older sister is doing. A few hours after Luke was born, we noticed a number of skin abnormalities on his chest. After an ultrasound and an x-ray were performed, a neonatologist informed us that Luke had a mass in his chest wall. We were quickly discharged from the hospital where Luke was delivered and transferred to the NICU at Children's Mercy. Luke underwent a number of additional tests and a needle biopsy. We were then discharged from the NICU to await the biopsy results at home. Eight days later we received great news - Luke's tumor was benign. When Luke was two months old, he underwent surgery to remove the tumor in his chest. The tumor was biopsied again and his original diagnosis of Infantile Myofibromatosis was confirmed. Two months later, we received an unexpected call from his oncologists. Findings from additional genetic testing had prompted his doctors to revisit Luke’s biopsy results. Ultimately, his diagnosis was changed to Congenital Spindle Cell Rhabdomyosarcoma. In the days ahead, Luke underwent scans to ensure his cancer had not spread, had surgery to place a port in his chest, and received his first chemotherapy infusions. Luke will receive 22 rounds of chemotherapy before his first birthday. Thank you for your support of the St.   Foundation. We’re hopeful for a future where no parent has to hear the words ‘your child has cancer’ and months and years of children’s lives are no longer dedicated to fighting this awful disease.