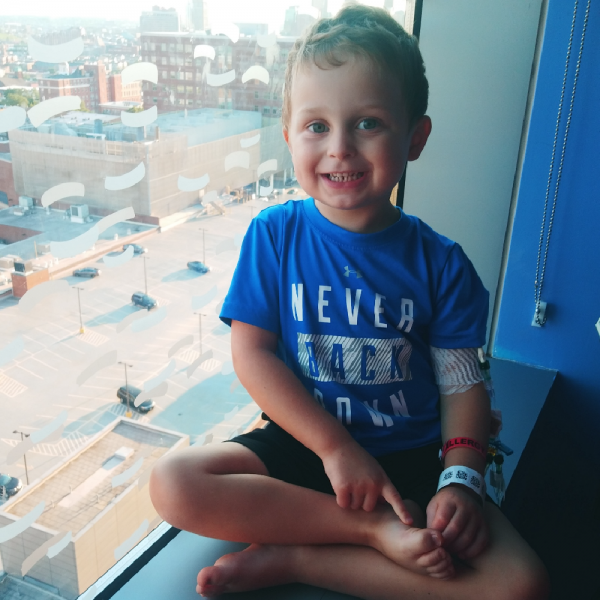 On August 12th 2020 at 3 years old our son Brantley was diagnosed with B-Cell Acute Lymphoblastic Leukemia (ALL) and we were shocked and devastated.

In the time leading up to the diagnosis Brantley was not his fun, energetic self that he normally is. He had a loss of energy, an ear infection that would not go away and finally the infection moved to his eye and then his hand. Due to COVID we were unable to go see our pediatrician physically and had to rely on telehealth appointments. After 4 tele visits and a trip to our local ED no one was listening. The pediatricians were telling us that it was just a severe ear infection and the antibiotics would stop it soon and the local ED told us that he had sprained his hand then discharged us even after being asked to do blood work. Finally mom had enough and contacted the pediatrician and advised them that blood work needed to be done and she was not going to take no for an answer. Finally they listened and agreed to get blood work performed. The morning of August 12th we got a phone call and were told that we needed Brantley to get to a pediatric emergency department immediately as his counts were extremely low. By this point Brantley had become extremely lethargic and fell asleep on the way to Johns Hopkins and then back asleep in the ED and would have to be aroused to be awaken.Within a span of a few hours we went from not knowing what exactly was going on to finding out our son had ALL. Hopkins then threw a bunch of information about what was going on and what would be happening in the future and wasted no time at all getting Brantley started on his treatment. It was then we found out that 95% of his bone marrow was leukemia cells and he needed blood transfusions immediately. He was admitted and started treatments the next day.

During our month-long in-patient stay at Johns Hopkins Brantley received his initial cancer treatments. During the treatments he also developed bilateral kidney stones that blocked his ureters and became very sick, this was on the day he was supposed to come home for the first time. After he was well enough to come home we were welcomed with a fire department escort to our home from the local departments in the area, Brantley loved this and still talks about it.

After coming home we were advised that the initial treatments were extremely successful and he was in remission then. Brantley has had multiple outpatient surgeries, along with being selected for a clinical 24 hour infusion trial. This trial requires him to wear a backpack to carry an IV pump if you see any pictures with his backpack. Overall he is still doing well but we have at least 2 more years of treatments to make sure this cancer stays away and does not come back. His kidneys are doing well and even though he will have to have them tested for years to come seems to have a good outlook on them as well.

He continues to amaze us with his bravery and strength, he helps mom and dad get through this. It will be a long two years but we know that he will get through this and kick leukemias butt. We cannot begin to thank everyone for what they have done, will do or are doing to help us through this. The outpouring of love is what makes this horrible ordeal a little bit less terrifying.