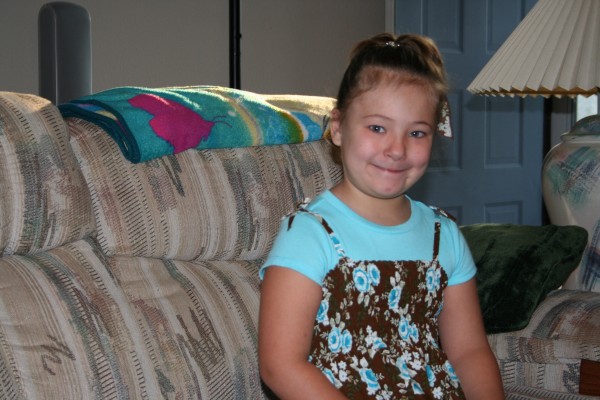 Isabelle was diagnosed with Acute Lymphoblastic Leukemia on March 21, 2007. We had been going to the doctor for two weeks trying to figure out what was wrong. March 11, 2007 she hurt her foot and we took her to an urgent care facility. She had a sprain and she was running a fever. We figured it was just a virus. By Friday of that week she was still running a fever and had no energy. I took her in to the doctor and she was diagnosed with Flu A. As the weekend went on we began to notice that something else was going on. She was bruising very easily, her stomach was becoming distended and Sunday night she had a bloody nose that lasted longer than 24 hours. I called the doctor again and told them something still was not right with Isabelle. We took her in on Wednesday and they sent us to the Childrens Hospital satellite in Parker. They did a chest x-ray, they suspected pneumonia. They also did a blood draw, just to make sure. The chest x-ray came back negative; her blood work was abnormal. The doctor at the site told us she had Leukemia and we were to drive immediately downtown to the main Childrens Hospital. The oncologist confirmed her diagnosis. She spent a week in the hospital. She has made it through almost 12 months of treatment with only losing her hair. She is brave and her nurse calls her the model patient. Isabelle started preschool at Mount Olive Lutheran Early Childhood Education Center in October. Her treatments will continue until June 2009 as long as she doesn't have any complications. We look forward to the day she is off treatment and considered cured.