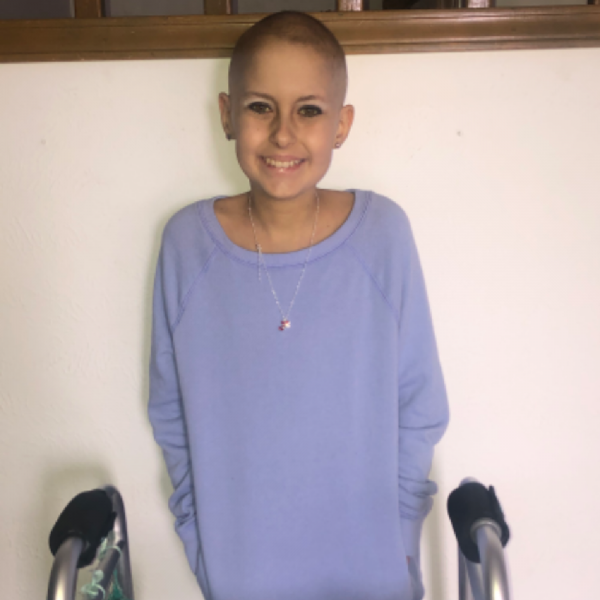 Jazmin’s Journey: At the beginning of January 2019, Jazmin had some pain in her knee and like any parent we thought nothing of it, until the realization that it was swollen. Upon taking Jaz to the doctor and many follow ups after that, On January 25th 2019, our sweet vibrant little princess was diagnosed with osteosarcoma (bone cancer) in her right femur. Between the chemo treatments making her sick and issues with her port this girl has shown more strength and courage than anyone I have ever met. On April 26th, the cancer had not spread and everything was perfect and surgery was set to remove the tumor. May 6th, the tumor was removed, they did remove the whole tumor, however at that time they did say they only got 50% of the cells which meant there was a high risk of relapse. She has fought a long battle with 24 chemo treatments, 7 months and 27 days in and out of the hospital. When all was thought to be won we found out on Sept 17th, that the already long journey just got longer. The cancer had spread to her right pelvic lymph node and her right lung. She will be going through yet another long 10 more rounds of chemo, except this time more aggressive. November 4, Jazmin’s scan results came back. The right pelvic lymph node was similar in size and the lung hadn’t changed so they considered this good news. December 11th, she completed her 4th round of chemo, scans were Dec 30th and surgery set for Jan 6th. Unfortunately, Jazmin was admitted for a typical fever after chemotherapy on December 17th and never had the surgery. December 28th she was diagnosed with a fungal disease called Rhizopus in her left lung. This is not common in Osteosarcoma patients but because her immune system was compromised she unfortunately got this. December 31st, Jazmin had surgery to remover her lower left lobe in her lung. January 3rd, she had a seizure and ended up in PICU for 2 1/2 weeks. Once she was stabilized she went back to the 7th floor. With lots of scans, blood test and time Jazmin was finally released February 14th. She will be on fugal medication for a quite awhile. Surgery to remove the cancer in the right pelvic lymph node is set for February 25th. The one in her right lung they are unable to remove at this time. We are also unsure about more chemotherapy because of the fungal disease. Jazmin has had an extremely rough year but she always has a smile and everything negative she puts into positive. She is a Hero to so many people and the greatest warrior we have ever seen for only being 11.  Thank you for supporting Jazmin and the more than 300,000 kids worldwide who will be diagnosed with cancer this year. By sharing the gifts of your time, talent and money with the St. Baldrick’s Foundation, you're supporting research to give all kids with cancer a better chance for a cure.