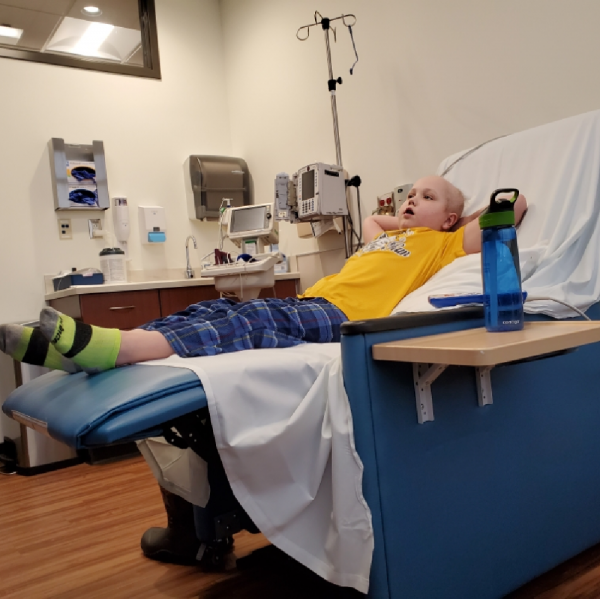 Collin Jones is an eight-year-old like so many others. He loves macaroni and cheese, playing with friends, silly jokes, being goofy, video games, playing outside, and hanging out with – sometimes pestering – his big brother. In September of 2019, Collin was diagnosed with croup after waking up one morning with stridor (difficulty breathing) and a barky cough. Croup typically presents abruptly but responds quickly to standard medications and steroids. Once kids are treated for croup, they typically feel much better by the next day. But Collin struggled to heal from his croup. He would take the steroids and feel great, but as soon as his dose was complete, he would end up back to where he started with difficulty breathing – and it was getting increasingly worse. The labored breathing continued, intermittently for almost a month. After trips to the pediatrician’s office, the Emergency Room, consults with multiple ENT specialists, the only diagnosis that kept coming up was subglottic stenosis – a narrowing of the trachea, just below the vocal cords. Doctors thought that the initial croup may have exacerbated the stenosis, causing him a more lengthy and exhausting healing process. Though we all talked about the subglottic stenosis, everyone was a bit surprised that Collin could have made it all the way to eight years old and never had a diagnosis of this before. After a long night of discomfort and struggling to find comfort in his breathing, one last visit to the Pediatric ENT was made. It was decided from there that the best option outside of all the meds, rest, and steroids that weren’t working would be to scope Collin’s airway and dilate it to alleviate the narrowing in his trachea. This would put an end to his discomfort and finally allow him to move forward and go back to feeling like his normal 8-year-old self. The procedure was scheduled for 2 days after that appointment, with the standard warning to report to the Emergency Room if anything worsened between that day and the procedure. Finally, a light at the end of the tunnel. Nobody was really excited to have to schedule a procedure with anesthesia for an otherwise healthy boy, but it was almost a month of not feeling well, doctors visits, and medications with no relief. That same night, just before midnight, Collin woke up again gasping, gagging, and struggling to breathe. We took him outside in the open crisp air, sat him in the bathroom with the shower steam hot and thick, got him up and walking – everything that we were instructed to do. He continued to struggle, so we went back to the Emergency Room. He needed help, and he needed it quickly. Collin’s breathing was stabilized in the Emergency Room and it was decided that he would be admitted to the hospital and have his scope that day. A couple more hours, and life could go back to normal. But when they did the procedure to dilate Collin’s airway, there was no stenosis. It wasn’t narrow – it was compressed. Something outside of his airway was pressing on it. Something seemingly solid, heavy, and not a normal part of an 8-year-old’s anatomy. To make things worse – Collin’s airway was so weak and compromised from the anesthesia that he was unable to breathe on his own coming out of anesthesia and had to be intubated. He was admitted to the pediatric ICU and we realized that life was not going to return back to normal, not for a long time. A CT scan was ordered immediately and there was a 7-centimeter mass pressing on his trachea and SVC (superior vena cava). To compare in everyday life, 7-centimeters is roughly the size of a peach. The biopsies that followed showed that Collin had T-Cell Lymphoblastic Lymphoma – a rare form of aggressive non-Hodgkin’s lymphoma. This happy, healthy little boy who only a few weeks prior seemingly had a simple case of croup was now on track to undergo over two years of intensive, multi-agent chemotherapies, scans, lab draws, mediport placement, and hospitalizations. Not to mention the long list of dangerous side effects, nausea, hair loss, weakness, and illness that would be his new everyday life while battling to overcome and be stronger than the aggressive cancer that was growing inside of him. We now take one day at a time and try to appreciate every moment that we have together. It is amazing how quickly priorities change and how simple life suddenly becomes. Collin has been through so much already in the last few months, but continues on, strong in spirit as we fight together as a family to beat cancer.