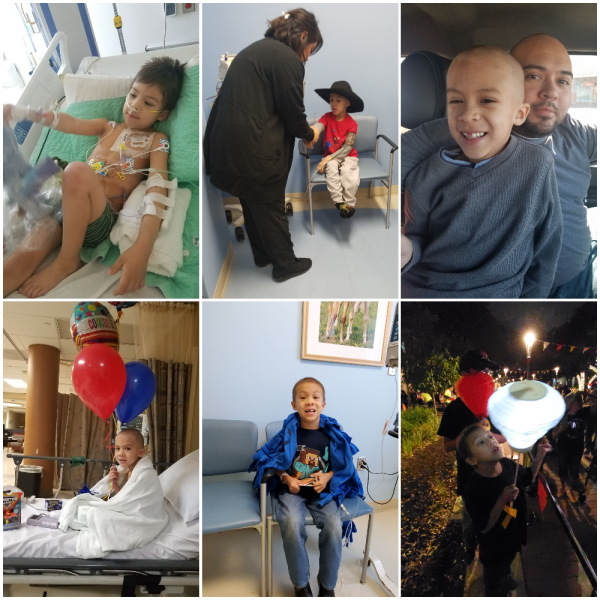 February 10, 2019 was the day our world changed forever. It was a Sunday morning, we went out to eat. Baby Victor had a bacon and egg taco, with the bacon and egg mixed together, and an orange juice. We decided we would take the kids to see the new spiderman movie. We ordered the tickets online. I went to pay and my husband, Victor, took the kids to the truck. But by the time I got to the truck, Baby Victor was in pain and just wanted to go home. I thought it was an upset tummy from the juice, maybe it didn't agree with him. I went to the movie with my daughter, and my husband took Baby Victor home. I called to check on Baby Victor, and my husband said," Something is not right I'm taking him to the emergency room." I told him to pick us up on the way. In the emergency room they took some blood and urine. The doctor told us he had some blood in his urine and it was possible that he had IgA neuropathy, they were going to transfer us to a children's hospital. They did an ultrasound and the ambulance came and took Baby Victor to the Children's Hospital of San Antonio. After they put us in a room, a doctor came in and asked if they had reviewed the ultrasound with us. We said we were told the results would be sent over and reviewed at the hospital. Another doctor came in and said your son has a mass on his right kidney, we need a CT scan. Baby Victor was taken and the test was done. We went back into the room and fell asleep. A few hours later, two doctors came in and woke up my husband and I, sat down and said, "Your son has a malignant tumor on his right kidney, known as Wilm's tumor, he needs surgery." Just like that our son went from a happy, healthy 5 year old to a victim of Wilm's tumor Stage III. Baby Victor had surgery on February 12, 2019 where they placed his port for the 27 weeks of chemotherapy that he was going to endure, and his whole right kidney was removed. The tumor was the size of a football in our 5 year old'ss little body. Baby Victor started his radiation and chemo the very next week. He took this journey on, but he never let it extinguish the fight in his heart. On November 27, 2019, Baby Victor got to ring his End of Treatment bell. It was the most incredible sound we have ever heard! Thanks to the incredible staff at Children's Hospital of San Antonio, UT Health San Antonio MD Anderson Cancer Center, the fundraisers for research, and the support from family and friends we have a 6 year old happy, brave, cancer survivor! Thank you for supporting him and the more than 300,000 kids worldwide who will be diagnosed with cancer this year. By sharing the gifts of your time, talent and money with the St. Baldrick’s Foundation, you're supporting research to give all kids with cancer a better chance for a cure.