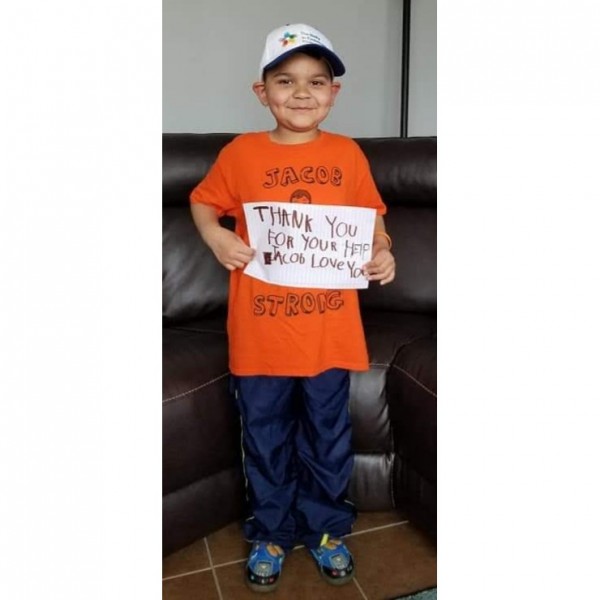 Thank you for supporting me and the more than 300,000 kids worldwide who will be diagnosed with cancer this year. By sharing the gifts of your time, talent and money with the St. Baldrick’s Foundation, you're supporting research to give all kids with cancer a better chance for a cure. Jacob and his mom live in Schiller Park, IL, Jacob was in kindergarten when he was diagnosed just days after his 7th birthday on January 22, 2018, he immediately started treatment at Lurie's children's hospital in Chicago. July 31, 2018 he had a bone-marrow transplant and had some complications that required a longer hospital stay. September 16, 2018 he was able to come home. November 10, 2018 he became very sick and was hospitalized again and spent a few weeks there but made it home for Christmas. In February of 2019 he spent a few weeks admitted as well. March 20, 2019 Jacob's Doctors gave him the O.K to return to school and said he was in remission!Jacob had not been back to school since being diagnosed, his first day back was April 1, 2019. July 18, 2019 Jacob's mom took Jacob in for testing because he was showing symptoms of a relapse and unfortunately it was confirmed a day later that he indeed had relapsed. August 2019, Jacob started chemotherapy treatments. August 16th Make a wish notified us that they where granting Jacob's Wish to go to Disney. He spent 5 amazing days at Disney with his mom and aunt and had an amazing send off and welcome home from his hometowns Mayor, first responders and surrounding first responders, community, friends, TSA and American Airlines. They truly made Jacob's wish all that more special!  On September 3rd,2019 he had a bone-marrow biopsy to see if the chemotherapy worked and unfortunately it showed the chemotherapy wasn't as effective as they hoped. September 9th he started a new much more aggressive chemotherapy. This time the treatment took a lot more out of him, he was in and out of the hospital and finally admitted in October. October 12, the doctors said he had appendicitis and his appendix was very inflamed he also had an infection they had to treat and due to low platelets they could not operate. From there Jacob continued to get more sick and weak. On October 17 he had 2 episodes of Vtach one of which required compressions and the doctors told us that they didn't think Jacob would make it through the night. It was the worst day ever, we kept our faith and hope and Jacob continued to fight. Slowly but surely his stats improved. By November 11th he was well enough to have the surgery needed for the appendix and also to remove a part of his large intestine. On November 21st he went in for a bonemarrow biopsy to see if this round of chemotherapy was successful. November 23rd, 2019 results from bonemarrow biopsy showed that he still had 5% Leukemia and would not be eligible for a bonemarrow transplant. After an extended stay Jacob was finally discharged on November 27th, 2019 just in time for Thanksgiving. However, December 3rd he was admitted again due to an infection but thankfully home the next day. In the meantime his Oncology Team had decided they would start a new round of chemotherapy as soon as he was well enough.  In mid December he started the chemotherapy. December 21st he was admitted with what appeared to be side effects from the new chemo treatment and thankfully was discharged on Christmas eve. January 13th, 2020 Jacob was admitted with an inflamed pancreas and his glucose levels where now also a problem. He had a bonemarrow biopsy on January 16th to see if the chemotherapy was effective. He unfortunately spent his 8th birthday at the hospital and on the evening of his birthday became very sick with what the doctors believe is yet another side effect from the chemotherapy. Unfortunately the results showed there's still 2% of Leukemia and the doctors will meet February 11th to discuss what the next step will be. He was discharged on January 25th and is now at home continuing treatments from home and regular bi weekly visits. Jacob is a warrior, he is strong and resilient. We have an amazing community and surrounding community behind us and we know we can conquer this. We are Jacob Strong!