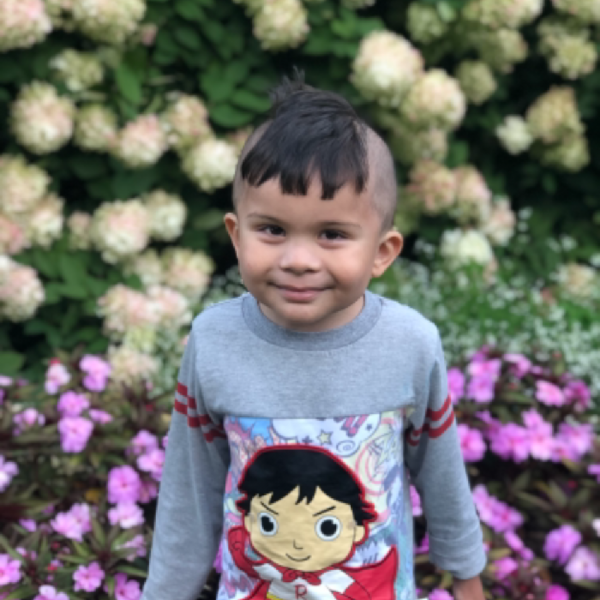 Rowan was diagnosed with Acute Lymphoblastic Leukemia on July 24, 2019. Prior to that date, Rowan was a happy and healthy 4-year old who had just graduated from Pre-K and was super excited to start Kindergarten at the new "big school." He loved playgrounds of any kind and occupied himself by being a great big brother to his almost 1-year old brother Asher and was eagerly awaiting becoming a big brother again to a baby boy due in October.  Shortly after graduating from Pre-K, Rowan started to become increasingly fatigued, needing frequent naps during the day, which was very out of character for him. His appetite also started to decrease, but his mom and dad dismissed both of these symptoms as perhaps a reaction to the summertime heat and mugginess. He then started randomly getting low-grade fevers that would disappear as quickly as they appeared. Again, this was dismissed this as perhaps his body fighting off a cold or some other virus. But on one rainy day in July, his mom brought him to meet some of his friends at an indoor playground. Rowan was unable to play for longer than a half hour. After that half hour, he complained of his stomach and heart hurting and had once again spiked a fever. It was then that his mom knew something wasn't right and called his doctor to schedule an appointment. The doctor ran blood work and it was discovered that his white blood cell count was 10 times higher than it should be at his age. He was immediately sent to the ER at Maria Fareri Children's Hospital, where he was diagnosed.  Although his family's world was turned upside down that day and still has their moments of struggle, Rowan's resilience and strength through this journey has been nothing short of miraculous. He is a constant inspiration to his parents and grandparents and is still the most amazing big brother to Asher and his new baby brother, Everett. Although kindergarten at the "big school" had to be put on hold, he is loving being homeschooled by "Amma" (his maternal grandmother). He is currently entering the Delayed Intensification stage of treatment and is still kicking butt and taking names!  Thank you for all the support you give to kids like Rowan. By sharing the gifts of your time, talent and money with the St. Baldrick’s Foundation, you're supporting research to give all kids with cancer a better chance for a cure!