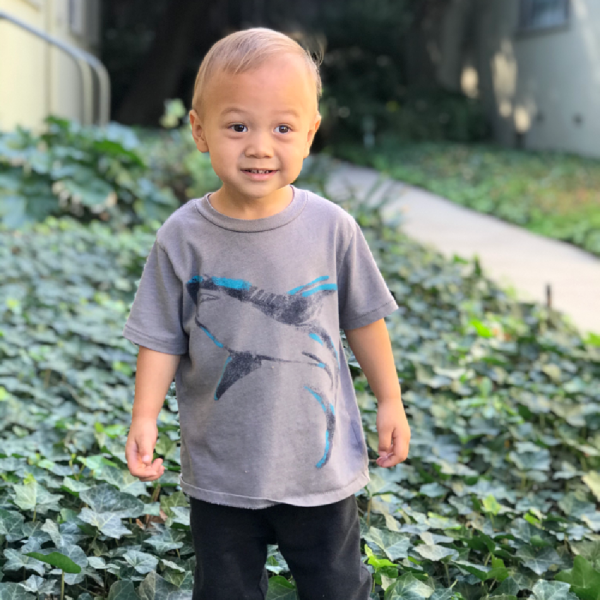 On January 31, 2018, Adam was diagnosed with Stage 4 neuroblastoma at around 7-months of age. Compounded symptoms surfaced over a matter of mere weeks prior to his diagnosis: a series of fainting episodes, an enlarged and hardened abdomen, a swollen/bruised eye, loss in appetite and vomiting, and increased discomfort/fussiness. One specialist after another could not find anything wrong with Adam. That morning, when Adam woke up with a bruised left eye, we knew something was wrong, and we rushed him to the ER at Children’s Hospital Orange County (CHOC). Scans showed a large mass in the abdomen, and further testing showed presence of the cancer cells in various areas of the body including his bones, bone marrow, and liver. I remember asking the doctor, “can babies get cancer??” I was in shock, and that was the day our lives changed forever. One week later, Adam was transferred to Children’s Hospital Los Angeles (CHLA) to be closer to home. At the time of diagnosis, the physicians determined the mass to be too risky to operate and recommended the start of chemotherapy treatment right away in order to shrink the mass size prior to surgery. For 7 months, Adam underwent an intensive 8-cycle regimen of chemotherapy treatment and surgical removal of the mass after just 2 months of chemotherapy. He completed treatment in August 2018 and his recent scan, one year post-treatment showed no evidence of disease. Adam is currently in remission. While he has some permanent vision loss in his left eye, he is still the happiest and toughest kid with a left dimpled smile, calming eyes, and an infectious laugh. He loves trains, swimming, playing at the park, and being outdoors. He also has a new baby sister that he loves so much, and you can tell he’s going to be the best big brother.