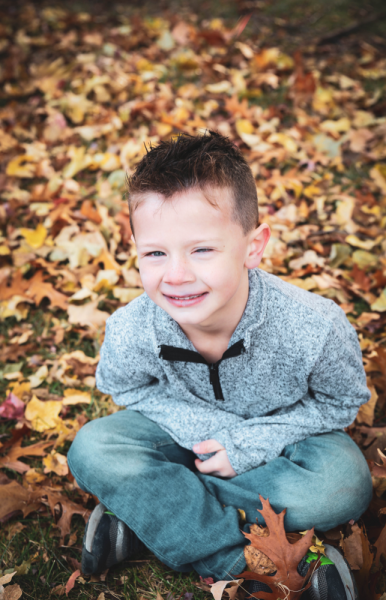 Augustus (Augie) was diagnosed on June 2nd 2015, at 18 months with i-Lateral Non-Hereditary Retinoblastoma. There are no local locations for Augie to receive treatment. We traveled to New York for all of Augie treatments. We went to two different hospitals so he had the best treatment possible. Our doctor is out of Memorial Sloan Kettering. That is where Augie does his EUA, laser, chemo injections as well as MRI. After our first visit with Augie's doctor Matt and I had to make a hard decision.

The tumors in both of Augie eyes were scary looking. His right eye was partially detached at the retina. While we could possibly save the eye there was a chance that Augie might never see out of that eye. We decided to take a chance to save both eyes.  We would go to the Presbyterian Hospital for Augie IAC (Inter-Arterial Chemo). Augie did 6 rounds of that type of chemo. We had great success with all of the combo treatments. Augie was given a stable diagnosis, the tumors were considered dead and stable.  Augie right eye healed it self and it was as perfect as we could of hope. We were over the moon with the outcome we had received. We were glad we took the chance.  We continued our follow up visits every 3 months.  After 1 year Augie dropped to a .1% of the cancer returning.

In August 2017 Augie had a blood in his left eye. The tumor became active again. It nicked his blood vessel in his eye. We called NY and they had us come out immediately. Once we arrived we were seen. Augie went into a EUA. That is when our world was turned upside down again, at that point we had no options. If we continue to leave the eye Augie could of gotten a secondary cancer. Augie's left eye was removed on August 31, 2017. Our hearts were broken. Unfortunately at that time we started to question our selfs if we did the right thing. We were so glad that we took the chance with the chemo and fought for both eyes. Its hard to not do the what if's, however if we didn't then our little boy would  been left without any eyes. While he is currently back in remission we still travel every 3 months for EUA. Augie receives scans yearly now making sure there is no secondary cancers.

*Update* On August 27, 2019, Augie officially got his cancer free status after 4 years 2 months and 27 days of fighting. If you ever get to see Augie or watch any of his videos you know that Augie has a personality that is larger than life. Augie didn't let the cancer define him. He took everything head on. He is a true warrior.

Thank you for supporting Augie and the more than 300,000 kids worldwide who will be diagnosed with cancer this year. By sharing the gifts of your time, talent and money with the St. Baldrick’s Foundation, you're supporting research to give all kids with cancer a better chance for a cure.