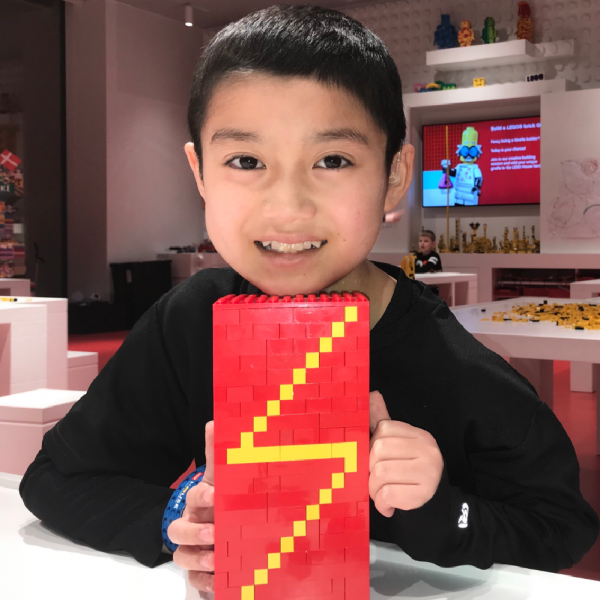 In October of third grade, Dylan was running at recess when he fell and tripped on a rock. Thinking he fractured his arm, he had an x-ray which revealed something not quite right in his left humerus. A couple months later when the area started to swell, it was diagnosed as osteosarcoma.  From there, it would be a long journey.  Dylan began treatment in January 2016 when he as nine years old. In that first year, he received chemotherapy, an investigational immunotherapy, and underwent resection and reconstruction of his humerus with a metal implant, as well as lung surgery. After a year of countless days and nights at the hospital, Dylan was excited to resume 4th grade in the fall of 2017 and the normal life of a 10 year old. But in March of 2017, Dylan relapsed in both lung and soft tissue. So for the next 6 months, Dylan received second line chemotherapy, as well as radiation therapy. He returned to 5th grade in the fall of 2017 and graduated elementary school with his class in the spring of 2018. A few months after starting middle school in 6th grade,  Dylan relapsed in his right lung. After a thoracoscopy to remove the nodule, Dylan started on an oral targeted therapy and was able to resume the rest of the year.   Not quite a year later, Dylan relapsed again in the right lung. After surgery to remove the nodule, Dylan started on third line chemotherapy.  Fortunately the regimen was outpatient and Dylan was able to resume most of his regular activities and return to school.   There are not many treatment protocols for relapsed osteosarcoma, and by this time, we had gone through them all and more. When Dylan relapsed again in the fall of 2020, this time with unresectable disease, he enrolled in a CAR T trial.  Unfortunately, shortly after the trial his disease progressed aggressively and he currently has advanced disease in lung and bone.  He is on an oral chemotherapy and we hope to enroll him in another immunotherapy trial soon.  Prior to his osteosarcoma diagnosis, Dylan was an avid soccer and basketball player. Because he had to avoid contact sports after diagnosis, he favorite hobbies are now Legos, cooking, and video games. Even without full function of his left arm, Dylan has adapted quickly and can ride a bike, zipline, kayak, swim, and lots of other things that surprise us each day. Beyond what he can do physically, Dylan amazes us with his mental resilience.   Treatment protocol and options for osteosarcoma have not changed in nearly 40 years, and there is still no effective treatment for relapsed osteosarcoma.  We urgently support research to find effective treatment options for osteosarcoma so that one day there will be a 100% survival rate.