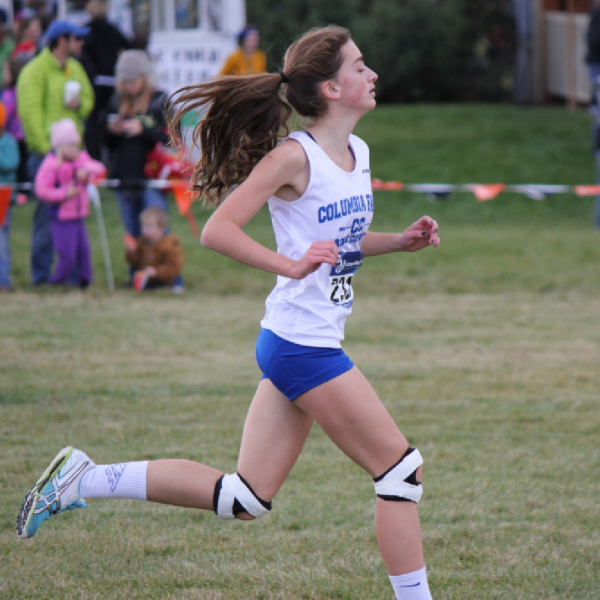 Diagnosed with Acute Lymphoblastic Leukemia at the age of 15 and a month before she was going to start her sophomore year of high school, Kimberly, a star athlete and straight A student found herself facing a tough battle at a time when her biggest worries should only include how much she was training for her upcoming cross country season, whether or not she was spending enough time in the gym working on her basketball skills, if she got into the right classes at school, or if the boys at school were cute.Kimberly's diagnosis was a shock. After feeling poor and achy for several weeks, she took a trip to the local doctor's office for a checkup. The doctor did blood work and returned to Kimberly's room and said "I think we're dealing with something evil here. I think you need to see an Oncologist. Would you like me to make a call?" Minutes later, Kimberly was heading to the E.R. at the local hospital, and two days later, she was flown to Children's Hospital Colorado in Denver.Kimberly started treatment in Denver and was allowed to come home about a month later to continue treatment in Kalispell, MT. Kimberly's cancer didn't respond to treatments, and by November she was told she needed to make some decisions after an already challenging fall of treatment. She was given the choice of the newer, but not as time-tested, CAR TCell therapy or undergo a bone marrow transplant. After weighing the positive and negative aspects of both treatments, she opted for the CAR Tcell therapy. She was accepted into a trial at the Lucile Packard Children's Hospital Stanford in Palo Alto, CA. Kimberly spent five weeks in Palo Alto for the treatment. After returning home to Montana, she received the news from the Stanford doctors that she was cancer free, but this news was delivered with the unfortunate caveat that her newly engineered Tcells failed to persist after they finished their job. Kimberly's genetic variation of Leukemia put her at an extremely high risk group for recurrence. Doctors from all of her treatment centers were in agreement that it was not a question of "if" her cancer would recur, but rather "when." They felt that it was challenging to control the first time and felt it would be more of challenge if she had to fight it again. All advised the same thing. Get a bone marrow transplant and do it now. Kimberly immediately returned to Children's Hospital Colorado in Denver.Kimberly received her transplant in early May 2018. She had a difficult time in the following months. She was in and out of the PICU several times. She had many serious life threatening complications. Two things were constant, though. First, she had an iron will. Second, she had excellent caregivers. In August, Kimberly was allowed to come home. Physically, she was a shadow of the person she was thirteen months prior before her journey started. Since she's been home, she has continued to make gains, get stronger, and heal (physically and mentally). Throughout her battle, Kimberly has been unable to physically attend her high school due to concerns about her immuno-compromised condition. Working with the high school, she has been allowed to complete her high school courses at home. Her work has been shuttled to and from school by her father, and she communicates with her teachers digitally. She has missed her sophomore and junior years of high school socially but not academically. She has maintained her straight A GPA and attends school sitting in a recliner in her own living room.Kimberly was unable to compete in sports her sophomore year, but she was allowed to stay involved with her cross country and basketball teams from the sidelines. Her junior year, Kimberly's immuno-compromised condition discluded her from being a part of cross country, but by November she was cleared to participate on a restricted basis in basketball. With a willing coaching staff and teammates, Kimberly practiced with the team as she was able. At the start of the season, she was too weak to run, jump, or shoot a basketball from point blank range. By the end of the season, Kimberly was able to step on the floor in a couple games for a few limited minutes, and even made her first varsity basket. Kimberly's team finished with a third place finish at the Montana State Class A basketball tournament.At the time of this writing, Kimberly has just started running track. Before Kimberly was diagnosed with cancer, she was one of the fastest high school distance runners in the state of Montana. Now, she is in the process of building her strength and endurance, and she can still only run for a few minutes at a time. She is making physical gains, and her track workouts are a mix of running and walking. She is not planning on racing until she feels comfortable with her abilities.We (Kimberly's family) don't know what the next chapters of Kimberly's story are going to be. We are saddened that she has missed two formative years of high school, but we are ecstatic that she is a survivor and is making experiences on her own terms. We are filled with hope for her future.