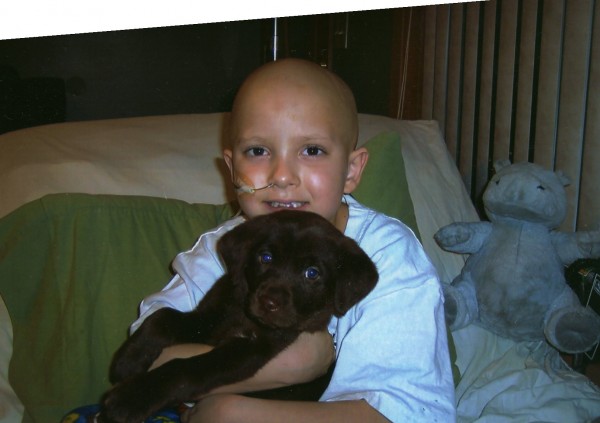 Jared was a funny, happy 6year old boy. Who loved to fish, go to water parks, and he said when he grew up he wanted to go hunting with his choc lab puppy named Jolli. And loved camping. He loved his nurses at his hospital and loved to tease them and make them laugh. Jared also has an identical twin brother Jayden, and a sister Jessica 14, a brother Josh 12, another brother Jacob 10, and 1 more Jordan 9. Jared also loved his PSP, PS2, and his Wii system. His favorite pet was his Siamese cat named Roxy. Also he called her his girl. He also loved his new choc lab pup Jolli. He fought Neuroblastoma for 4 years, then we relapsed for his fourth time right before Christmas. He had surgery on Christmas Eve, and started Chemo on Christmas day in 2008. The Neuroblastoma was in his spine, hips and his pelvic bone. Three weeks after his Chemo that was given to him on Christmas day, Jared was still experiencing a lot of pain, so Milwaukee called the Children's Hospital of Philadelphia for advice. Milwaukee explained to them that they felt the treatment he received was not working. Philadelphia suggested a treatment called MIBG Therapy instead of using Chemo. They felt this treatment would provide more immediate pain relief as well as not to make Jared's body Chemo resistant. After talking with the doctors in Philadelphia, we booked the next flight available to Philadelphia. At his first appointment in Philadelphia, they needed to do another MIBG test. This test showed that one of the tumors that were on his spine had disappeared, which means the Chemo he received in Milwaukee was starting to work. The doctors in Philly still felt that the MIBG Therapy was still the best choice of treatment, so the next day he was admitted to the hospital for hydration and put in a catheter. The next day at about 2 PM he received his MIBG injection. The Injection consists of dye and radiation. After the injection Jared was said to be radioactive and could not leave the hospital until his levels of radiation were safe to the public. After 4 days in the hospital, Jared was allowed to leave the hospital and we were able to get a flight back home the next day. Despite all of this treatment, Jared passed away on August 6, 2010. Our child has been through it all, but continued to fight, and has been an inspiration to all of us.