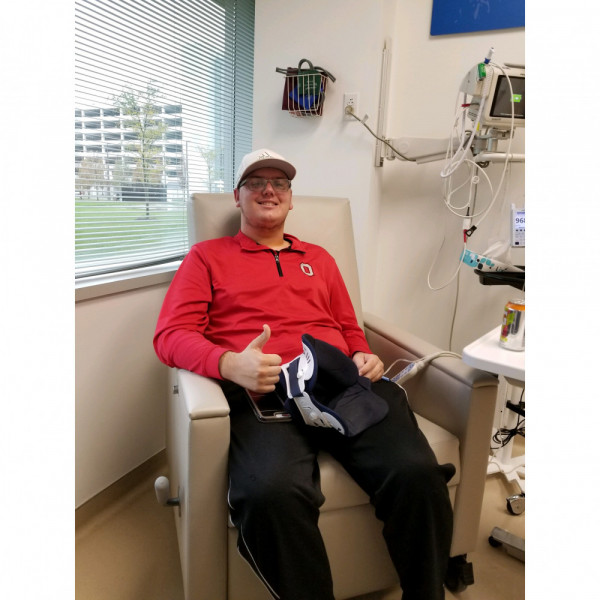 James Ohman Jr. better known as JJ, began having pain in his left arm in March of this year. JJ was working in a warehouse doing heaving lifting. We believed his pain was from a pulled muscle so we treated it at home with Motrin and ice packs. JJ’s pain continued and began to worsen as the months went by. JJ finally said that he is tired of the pain and insisted something was wrong. We met with his Pediatrician and explained what he was experiencing. His Doctor referred us to an Orthopedic. September 11, 2018, JJ had an X-ray and upon reading the X-ray the Doctor advised us that he need an MRI. We were a little confused as to why he needed an MRI of his neck for pain he was having in his arm. Looking back at it now it is evident to us that they saw something in that X-ray that was abnormal.September 18th JJ had the MRI, we were thinking that they we going to find a torn ligament or pinched nerve and with a few trips to the chiropractor or maybe more rest he would be back to normal in no time. Later that afternoon we received a phone call with the results. We were not ready to hear what came next. JJ has a tumor on his spine that measures 5cm x 3 cm (the size of a lime) and he will need to have surgery. We finally had the answers as to why JJ has been in so much pain and was having difficulty in his left arm.October 10th we traveled to Cleveland Clinic to have the tumor removed. The Doctors informed us the surgery would be long due to the location and size of the tumor. The surgery itself lasted eight and half hours, the surgeon met with us after the removal and told us he was able to remove a large portion of the tumor but that there was some he could not get out due to it’s location near the nerve root. They also had to remove a joint on the left side of his neck due to the tumor being on both side of it. JJ had to have his cervical vertebrae fused from the C-2 to the C-7 on both sides. A biopsy of the tumor was taken for further testing, but every indication was that the tumor was benign. JJ immediately felt relief in his arms after surgery and was on the road to recovery….or so we thought.October 25th, 15 days after surgery we met with the Cleveland Clinic Team to discuss the pathology results and this is what we learned.JJ has a rare form of cancer called Ewing’s Sarcoma.This cancer, which was located in his neck, is what the doctors called an unusual location. Now having a diagnosis JJ needed further testing to determine how far it may have spread. JJ had to have a full body MRI, ECHO gram, Pet Scan, CT Scan and multiple Doctor consults, it is believed JJ’s cancer has not spread throughout the rest of his body.We are now moving forward to tackling this disease and kick it’s butt. JJ is scheduled to have 14 chemo treatments, which will be spread out over the next 42 weeks. JJ may also have to undergo radiation treatments as well in the future.In preparation for the chemo treatments JJ had a Med-port surgically placed into his chest. November 1st JJ received his first chemo treatment.We now know of the side effects of chemo treatments, we have come to the realization that this road to recovery will be long ongoing for JJ. Our once vibrant strong son will become weak and sickly from his treatments. We know that JJ has to take this tough journey to become free of this deadly disease, cancer.Please keep JJ Ohman in your thoughts and prayers as we take this journey together.#JJSTRONG #TEAMJJThank you for supporting me and the more than 300,000 kids worldwide who will be diagnosed with cancer this year. By sharing the gifts of your time, talent and money with the St. Baldrick’s Foundation, you're supporting research to give all kids with cancer a better chance for a cure.