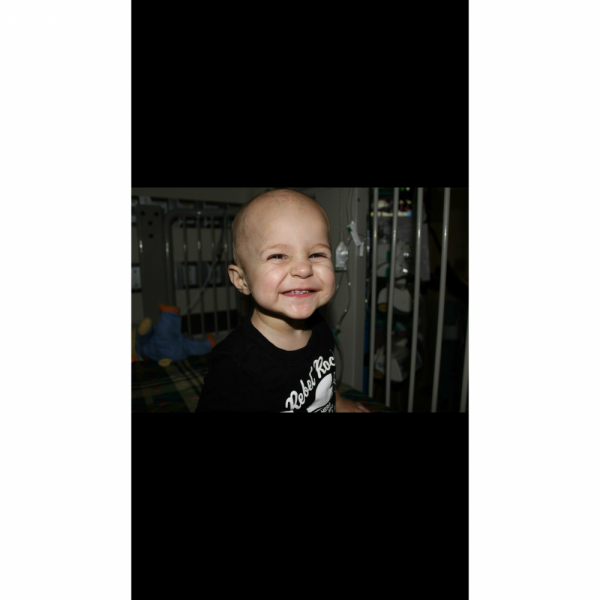 Thank you for supporting me and the more than 300,000 kids worldwide who will be diagnosed with cancer this year. By sharing the gifts of your time, talent and money with the St. Baldrick’s Foundation, you're supporting research to give all kids with cancer a better chance for a cure. Because of the treatments received by my mom when she was 3 years old for stage IV neuroblastoma, she was eventually unable to carry to term any biological children and she and my dad ultimately adopted my older brother, and then me, as infants. At 12 months old, my doctor felt a mass in my abdomen, and sent me for an ultrasound, which immediately turned into a CT, which immediately turned into a diagnosis and an admission, surgery to place a port, and the start of chemotherapy to treat what was believed to be stage III Wilm’s Tumor. It had extended from my kidney into my inferior vena cava (ivc) and was so far up, it was nearly touching my heart and impossible to surgically remove without a complete cardio-pulmonary bypass (stopping my heart and draining my blood). So, I began chemotherapy in hopes it would shrink. After five intense weeks, and numerous hospitalizations, my blood pressure spiked to dangerously high levels and they were unable to medicinally get it under control, so I underwent a 7+ hour radical resection and nephrectomy (they removed my kidney too). I went into anaphylactic shock from morphine following the surgery and ended up in the pediatric ICU, followed by more time in the oncology ward before being sent home. Once I had healed enough to restart chemo and radiation, my mom brought me back in and the entire team of doctors came in. The pathology had come back and my cancer was actually cystic partially differentiated nephroblastoma (cpdn), an extremely rare version of Wilm’s that needed no radiation and no further chemotherapy. I was officially downstaged to stage II and considered as of that date to be “no evidence of disease” (or, “NED”). I continued to live with my port for another 3 months, and had several more hospital stays during that time, before I had my final cancer-related surgery to remove it. Since then, I’ve done remarkably well and continue to thrive. I am now over 4 years NED and when I hit 6 years, I will be transferred from oncology care to the late effects/long term care clinic for pediatric cancer survivors. Unfortunately, just days after I hit the 3 year mark of NED, my mom was diagnosed with metastatic leiomyosarcoma, which is believed to have been caused by the treatments she received as a child for her neuroblastoma (specifically and most likely from the radiation, but possibly, as well, from the extremely toxic regimen of chemotherapy drugs she was given, many of which are still given today... I received two of the six she had!). Despite the extent of her disease, she continues her fight, 1.5 years later, but is proof positive as to why we need more research and better treatment options for children battling cancer. No child should have to go through cancer to begin with but, if they do go through it and survive, they shouldn’t be burdened with the extremely high risk of a secondary cancer caused by the treatments used to save their lives the first time.