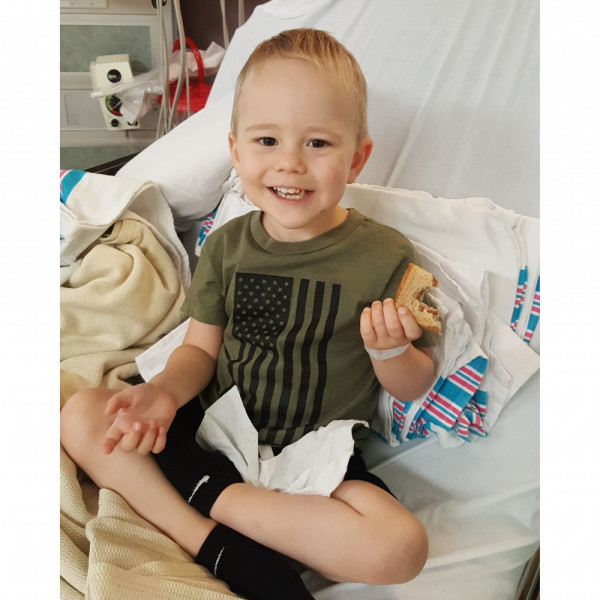 Liam is a loving and caring 3 year old, he loves to play and use his imagination. He loves to laugh and tells great jokes! He loves cars, trains, fixing thing with his tools. He love to be outside as much as he can and loves to read books. He is an amazing son and brings so much joy and love to our lives! I can only imagine all of the adventures ahead!Just before Liam’s second birthday, he came down with a double ear infection and was put on antibiotics. A couple weeks later, he was still having unexplained fevers and fatigue. I knew something wasn’t right and I thought the ear infection was still present. When his doctor said his ears were clear, we immediately talked about getting blood work done since he had very swollen lymph nodes along his neck, as well as abnormal bruising. About 3 hours after the blood work, we were called back to the office and our doctor shared that Liam was extremely dehydrated, very anemic, and she was 98% positive but it could be leukemia based on his blood work. We were sent directly to the ER to be admitted to begin testing and he had a bone marrow aspiration the next day. We were giving the official diagnosis two days later. Liam was diagnosed with B-cell Acute Lymphoblastic Leukemia and started treatment right away.Liam was put into the very high risk protocol for treatment because of his bone marrow results and because he did not reach remission in the first 30 days. His treatment was very intense over five phases that were each eight weeks long. Each round consisted of weekly chemotherapy and many lumbar punches under sedation to inject chemo into his spine. One phase including four rounds of high-dose methotrexate which needed a 4 to 5 day hospital stay each round. He also had an allergic reaction to a certain type of chemotherapy, so in place of an IV treatment for that chemo, he had to have 56 leg injections. He also had several other hopsital stays because he developed neutropenic fevers since his immune system was so compromised. One of the biggest struggles for our family was that my husband had to leave for deployment in August and returned home in January. Before my husband left, we did receive the great news that Liam had reached remission! Liam is now in the maintenance phase which will be two and half years of daily chemotherapy pills, along with monthly chemotherapy infusions. His total treatment plan will take three years to complete, his end of treatment date is August 2020!