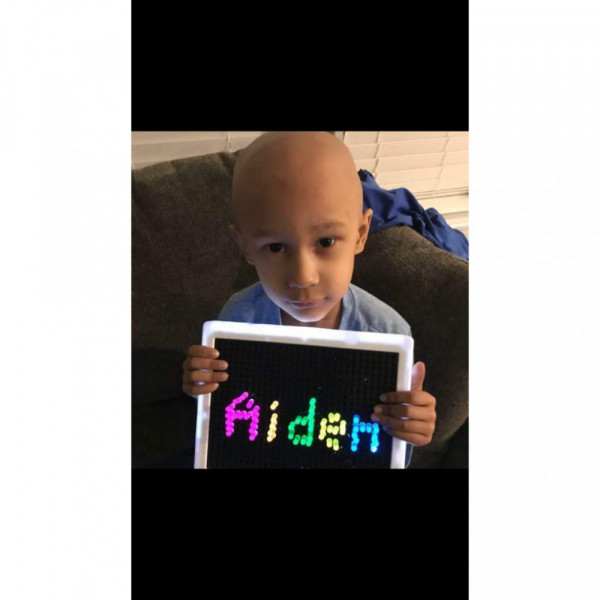 Aiden had just started Kindergarten in August 2017. He was enrolled in Special Ed. When he was 2 1/2 years old, he was diagnosed with moderate to severe autism. He had been at the PPCD in Anna, TX and was super excited to be back in school and see familiar staff. During Labor Day Weekend, he got a fever and was limping. I took him to his doctor the Tuesday after Labor Day. The doctor did blood work and X-rays. He sent us home saying that he was anemic and possibly had a viral infection that settled in his hips. We gave him Tylenol and Advil but the limp never went away. My child, who is pretty nonverbal started putting a couple words together. He kept saying,”I’m sick. I’m sad.” I knew something was wrong. The doctor referred us to a hematologist, but they wouldn’t see us til mid October. He kept having fevers and sent home every day. At the end of September, he was struggling to walk so we went to the ER. The ER sent us to Dallas Children’s to get an MRI. They never did it. They thought for sure it was Juvenile Rheumatoid Arthritis. They sent us home and we saw them later on that week. In early October we met with both the Hematologist and the Rheumatologist. After a ton of blood work they decided to finally do a MRI. They saw something on the scan and told us to do a bone biopsy later that week. On October 24, 2017 my beautiful boy was diagnosed with Stage IV High Risk Neuroblastoma. On October 31st, they removed an adult fist sized tumor from his abdomen and placed a port. He did 6 rounds of high dose chemo and we were preparing to do 2 Stem Cell Transplants. A week before, they rescanned him. He had no new growths but the cancer was still in his bone marrow...behind his left eye, both shoulders, his whole spine and both hips. We have gone off protocol and are now trying to see if 2 rounds of Immunotherapy (Ch. 14-18) will help. We are currently on the 2nd round of Immunotherapy. They are rescanning on May 9th, 2017. If it’s working we will continue on the Immunotherapy. If not we have to find another option. My son’s birthday is May 31st and I want to help him and the other kiddos and parents who are fighting to help these children get better treatment that doesn’t cause them to have toxicity and beat cancers butt. Thank you for supporting me and the more than 300,000 kids worldwide who will be diagnosed with cancer this year. By sharing the gifts of your time, talent and money with the St. Baldrick’s Foundation, you're supporting research to give all kids with cancer a better chance for a cure.