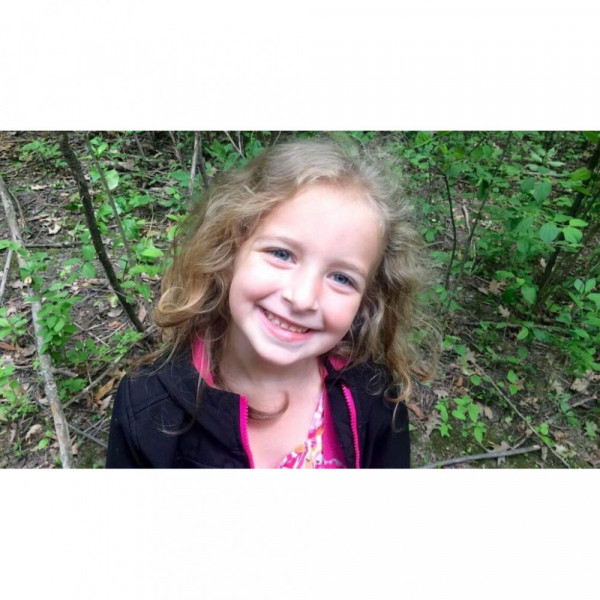 Cheyannes journey began with needing a pair of eye glasses for what was considered to be a lazy eye...2 weeks after getting them she was complaining of headaches and not wanting to wear.them or even play with the tablet after school...She would come in and lay down...The school had called me because one of Cheyannes friends had helped her to get down to the nurses office because her balance was off and she had almost fell..We went to pick her up and brought her home..Because she was such an active little girl we kept asking her if she had fallen or did a flip on the couch and missed...shed just say no..But shed get up and be ok..Well 2 days of this ( im still convinced she fell at this point) and we call the dr to get her looked at because this day she couldnt get up...We got her into the dr office to be seen for about 5 minutes when the dr says im going to send you up to Strong right now to get a catscan..Ok. We packed her up and picked up her brother as we werent sure how long a catscan would take and headed up to Rochester planning our dinner outting for on the way home...That outting never happened..When we got to ER with her they already had wristbands made and we were immediately admitted...She underwent her catscan and we were surrounded by a Team of dr.s telling us the results were a Brain Tumor in her brainstem...They at this point were 97.9% sure it was DIPG .which is UNCURABLE UNSTOPPABLE and UNTREATABLE...i went into FIGHT MODE and said no not our babygirl.  You guys are wrong..i want another opinion...They said they would do a biopsy and send it out to be tested to see if any parts of that tumor was treatable..Meanwhile youll stay here and we have to start her on radiation tteatments right away to hopefully stop the tumor from growing..Being it was 2 days before Christmas the Radiology Department wasnt open and we couldnt get started until after the holiday..We were sent to the  PICU Unit and the journey began..Chey kept getting sick everytime they lay her down..the fluids werebuilding up in her brain.  The discussed with us the pissibility of a shunt being out into her brain to remove the fluids building up...it was a shunt you could put your finger onand pump 10 times if the fluids were building..Mind you i still had a 20 year old daughter that had no clue of any of this and i didnt want to make that phone call until i absolutely positively sure of what was wrong because i knew everyones world was being completely torn apart...i hated that call...i will NEVER forget it as long as i live...Her sister was up at that hospitol within 45 minutes and Cheyanne her Dad me Haley and Devon were all there to get her better and be her support...30 rounds if radiation with no sedation ...breathing tubes shunts placed many.pokes many MRIs and CATSCANS later we find she isnt mobile enough to be accepted into any clinical trails and we were forced to be treated right here..She wasnt safe to travel..After finding that her tumor had grown after the 30 radiation treatments we were going to begin AVASTAN treatments.  They would be on an outpatient setting...Meaning after 76 days in there we could bring our babygirl home...March 6 she had an MRI that showed definate growrh in her tumor and we needed to act fast. She had been out on steroids immediately upon admission as well...they increased her steroids and we were coming home..We did just that...Cheyanne NEVER got to do a Make A Wish trip because she was so sick all the time and she simply wasnt strong enough..She wanted to laugh and play and go to school and she didnt want people to see her with the NG tube in her nose...we watched our babygirl go from a spunky happy go lucky loveable little girl to a sad unable to walk babygirl...our daughter was NEVER sick a day in her life...We did 6 weeks of Avastan treatments and chey was complaing of pains ...her butt hurt all the time no.matter what.  The steroids obviously made her gain weight..we were in a whirlwind and doing all we could round the clock to keep her happy and comfortable...On June 8 2017 Cheyanne had her final MRI which showed SHRINKAGE to half of the size it was since diagnosis date...YES our family is so happy.   Were going to be that 1 percent....the 1 percent that survived..Our Dr and his team had great news and plans and we were going to be mixong a new drug and the AVASTAN together to treat a part of this tumor that the biopsy showed was treatable...Yes our prayers were being answered..14 days later to the day our Cheyanne grew her wings...the worst day of our lives...Now we are left here without her and are completely devastated and distraught...This RARE DIPG is killing our kids and we need to STOP it....its a thief in the night and a rapid growing killer..Please dont turn your heads from this....we had never heard of it either and were naieve but today were dedicated to helping raise awareness and funding for a CURE ...Little did we know our baby would never walk play sing dance go to school again NOTHING! Please dont keep turning your heads CHILDHOOD CANCER IS REAL ..its killing our babies...Dont let it happen to you...!