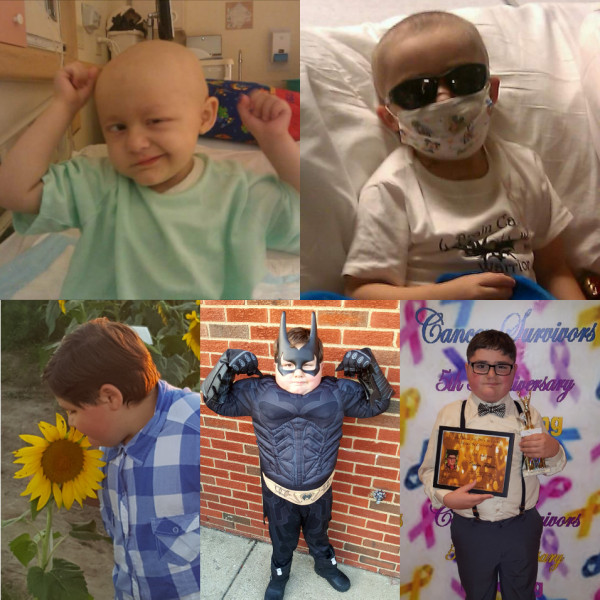 Caden's cancer was discovered in August 2010 after a few days of complaining of headaches follwed by a noticeable change in coordination. That was one month before his 3rd birthday. Being a nurse, I took him for a CT scan, thinking that he possibly bumped his head on something without my knowledge and had a concussion. When the scan showed what, at the time, was thought to be multiple tumors in his brain, Caden and I were transferred to Rainbow Babies and Children's Hospital in Cleveland in the early hours of the morning. A full body scan there confirmed the brain tumor and identified another tumor on his spine. Although not officially diagnosed at that point, with my education and medical background, I knew that it was cancer. The first of two brain surgeries was scheduled for the next morning, where they would go in at the base of his head and remove the tumor. It was after that surgery that we received the diagnosis of medulloblastoma and it was discovered that he had not two, but one very large tumor in his brain that took up the entire 4th ventricle and grew between the hemispheres of his brain into the 3rd ventricle. He would need a second surgery just three days later, entering from the top of his head, to remove what they could of the rest of the tumor. They were able to successfully remove most of the tumor but not all. The second surgery left Caden unable to speak, eat, drink, sit up unassisted, or even keep his eyes from rolling downward. He was no longer potty trained. It was as if a "reset" butting had been pushed. This, we were told, was called Posterior Fossa Syndrome and could last from weeks to years to infinitely. Radiation therapy was discussed as part of a treatment plan by his team but his father and I (divorced) agreed that his brain was still rapidly developing at his age and we didn't want to cause any more damage than necessary to save his life. After approximately one month in Pediatric ICU Caden was transferred to the Hematology - Oncology unit at Rainbow where he would begin a chemotherapy trial without radiation. Treatment would be long and difficult, and Caden and I would spend many months away from his two older sisters (then 9 and 4), seeing them only for brief visits a couple of times a week. That was very hard on all of us. Though it was clear within a few months that it was working, the chemo was the worst part and I don't care to go into detail about what he endured. In the meantime I lost our home and my fiance and I stayed either at Rainbow with Caden while he was in treatment or at the Ronald McDonald House with him during brief treatment "breaks". Chemo lasted approximately one year, with five months of that being mostly inpatient and six months of outpatient chemotherapy medication administered by me. He's had two surgeries on the muscles of his eyes to correct them and his specialist is considering a third. He now wears a very strong prescription for 20/40 vision inn one eye and 20/100 in the other . He had a gastric tube placed to be able to pump nutrition and medication directly into his stomach, which has since been removed. Caden slowly and painstakingly regained the ability to talk and walk, even without the use of a walker as they said he would likely always need. He has speech, physical, and occupational therapies weekly to help him continue to improve his deficits from the surgeries. He is in a standard classroom in the 4th grade with a one on one assistant and many accommodations. He does nearly everything any other almost 10-year-old boy does, it just takes him a little longer. Caden is a smart, loving, and funny little boy who loves his family, playing basketball, and watching WWE wrestling. He is artistic and very good at math. He has a few close friends and is well liked by all of his classmates and teachers. He never once, through any of it, had his spirit broken, though there were definitely times when he was scared, frustrated, or sad. He is absolutely amazing and we're so extremely proud of him! Thank you for supporting me and the more than 300,000 kids worldwide who will be diagnosed with cancer this year. By sharing the gifts of your time, talent and money with the St. Baldrick’s Foundation, you're supporting research to give all kids with cancer a better chance for a cure.