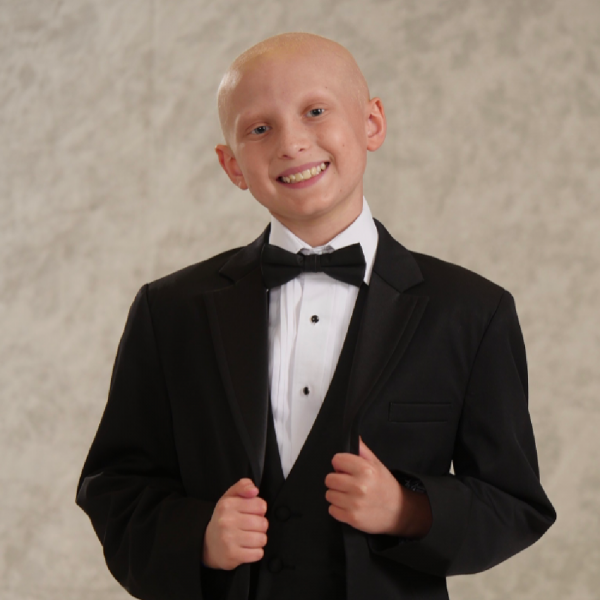 Thank you for supporting me and the more than 300,000 kids worldwide who will be diagnosed with cancer this year. By sharing the gifts of your time, talent and money with the St. Baldrick’s Foundation, you're supporting research to give all kids with cancer a better chance for a cure.
Thursday, July 19, 2018 - After doing 8 rounds of chemo, a CT scan was done to see where the tumor was. Unfortunately there was tumor left but it was so small they could not get a measurement on it. After discussing with surgeon it was decided that they would not do surgery to remove the rest of the tumor. Reason being they would have to remove about 3 ribs and with DJ still growing it could cause some kind of deformity. Also where the tumor is located, there was a high chance of permanent nerve damage. DJ is now on his 16th of 31 rounds of radiation. In addition he is getting chemo every 14 days. However we are on our 2nd week of chemo delay due to his platelets being low. This is such an emotional roller coaster. I want him to be able to have his “first day of school” with his friends. Hopefully this will happen but in the meantime we will continue fighting the fight
Updated 1/27/19 - DJ finished up his last treatment the week of December 2nd. After end of treatment scans, the spot where the cancer originated was clear. However, another spot showed up in his left pubic bone and his right chest area. He is now getting more intense treatment. They are preparing him for a stem cell rescue. He had his first treatment the week of January 14th. He had a PET scan scheduled for Feb 4th, MRI of chest and pubic bone on Feb 7th, another bone marrow on Feb 8th ( the one they did on Jan 13 th showed he had cancer in about 20% of his bone marrow) and a chemo admit on Feb 11 th. The plan is to get the stem cell from him after this 2nd treatment. DJ has a long road ahead of him but he is a strong young man and he will continue being #PATTERSONSTRONG