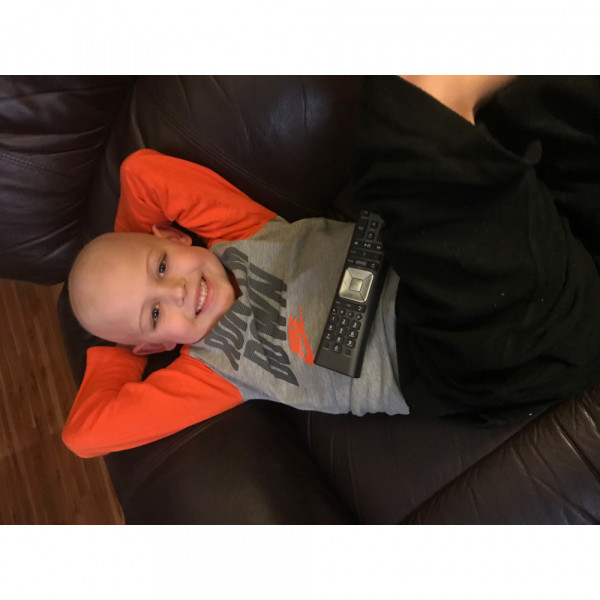 On August 24th, 2017, our lives were changed forever. Our beautiful, tenacious, caring, and much-loved son, Jacob Dobie, was diagnosed with Acute Lymphoblastic Leukemia (ALL). Upon observing Jake experience strange bruising, small scrapes that didn’t want to quit bleeding, and abnormal fatigue for a growing, active six-year-old boy, we took Jake to the doctor. Blood tests revealed that his blood platelets were extremely low, almost to the point of non-existent. Jacob was then rushed to Central Dupage Hospital, where he was ultimately diagnosed.

The first week in the hospital was terrifying; everything moved so quickly. When we first arrived, Jacob was in dire need of more blood. Unfortunately, he suffered from a reaction to the blood infusions that were given to him, which caused many more significant health concerns. The day after his diagnosis, he had surgery to place a port in his chest. We were living every parent’s worst nightmare. We had so many questions. What’s going on with our little boy? Is this really happening? How can we make this go away for our son?

After that first week, Jacob was sent home and put on a strict regimen of daily chemotherapy and steroids that changed his attitude and demeanor. It was heartbreaking to watch. He was home for about five days before developing a fever. Jake suffered from two simultaneous blood infections which then led to Endocarditis, an infection of the heart. Needless to say, we spent several fearful weeks in the hospital with our son as he battled for his life.

Jake was discharged on several courses of IV antibiotic infusions, which were administered by us at home around the clock. Our child couldn’t walk up the stairs, because he had lost all the strength in his legs; he resorted to crawling because of the pain he was enduring. The first few months were brutal. Because he was so ill, Jacob could not attend school, nor could he have visitors other than family. It was a very lonely and trying time for all of us. It was an experience no parent could fathom for his/her child, and one that has tremendously impacted Jake’s siblings as well. We will never forget when our oldest child, Max, said, “I just want my brother back!”

By October, Jake had gained enough strength for a tutor to come to our home. In November, he began attending school intermittently, and finally, after fighting so hard, Jake started feeling better more consistently. This allowed him to attend school more regularly as he learned how to cope with his new life.

Here we are now, a year and a half later, and Jake is in the maintenance stage of his treatment, which entails daily chemotherapy, monthly chemo infusions, and spinals with chemotherapy every three months. Although aggressive and severe, we are happy he is at this place in his treatment. It is allowing him to be more like the boy we love, the boy Jake deserves to be. He is attending school and loves second grade. He plays soccer, football, baseball, and basketball, but his favorite pastime is that of a typical seven-year-old child, video games.

Jacob is expected to be finished with treatment on Halloween of 2020. If it wasn’t for the love, care, and dedication of those who strive to end childhood cancers, our son wouldn’t have had a fighting chance. Only four percent of federal cancer funding goes towards pediatric cancer; therefore, it’s because of donations to foundations such as St. Baldrick's that our son is where he is now. So thank you from the bottom of our hearts...thank you for donating money for cancer research, thank you for shaving your head, thank you for volunteering to help, thank you for your contribution to a very worthwhile cause...one that will save lives, one that has saved our son, Jake!