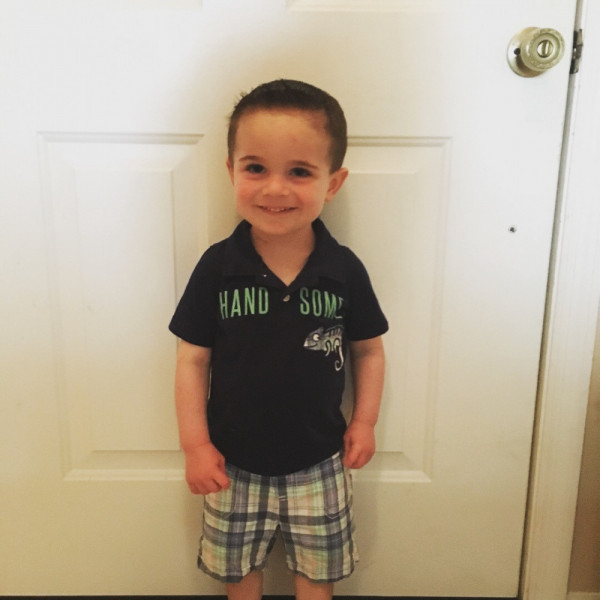 In October of 2016 Grant became sick with an "upper respiratory virus". After multiple trips to the doctors over approximately 4 weeks we decided to bring him to the ER. Labs and tests showed an elevated white count, an enlarged liver and spleen, and narrowing of his trachea. We were transferred to Florida Hospital that night to rule out cancer. We NEVER thought that would be the diagnosis. We thought it was probably mono or mumps(he was less than 1 and not vaccinate yet). I took the ambulance ride with Grant and Dad followed behind us. I was 7 weeks pregnant and thought I would probably vomit for most of the ride. We got to Florida Hospital around midnight on October 22,2016 and by noon that day we had an official diagnosis of ALL. He was immediately started on fluids to prep his body for chemo. Multiple tests were done including CT scans, echo, ultrasound of his abdomen, chest X-ray, and EKG. The very next day we were transferred to the ICU to keep a close eye on his breathing. The mass in his chest was pushing on his trachea. On October 24 he was brought to the OR to have a line placed for chemo, a bone marrow biopsy, and his first lumbar puncture. The anesthesiologist came in and told us that a medistinal mass (the cause of the narrowing of his trachea) was "an anesthesiologist worst nightmare". They told us if his body relaxed too much with sedation and his muscles relaxed that the mass could collapse his trachea and they wouldn't be able to help him breathe. I have never been so scared in my entire life. But as they wheeled him back to surgery a call came to my phone. Our pastor was calling to pray. He had no idea Grant was headed in for surgery. But timing was perfect and I immediately felt a sense of relief. I knew immediately that God's got him. Grant's surgery went well and we were able to start chemo that afternoon. Grant was then transferred to the oncology floor that afternoon. I remember having a million questions. I couldn't wait to get to the oncology floor because I needed some answers. As soon as we got there an amazing nurse came in the room named Jeanie. She gave me a hug and said " you looked like you could use this". It's something I'll NEVER forget. It was true. I was so overwhelmed with emotions. She stayed in the room for at least 30 minutes and answered all of my "important" (probably silly) questions. She never seemed annoyed or rushed to leave. She just answered them. Grant got settled in and that was the start of our journey. We spent the next 53 days on that unit. Grant had many lumbar punctures and chemo treatments. We took everything Day by day. Some days were terrible and others were great! Grant learned how to steal everyone's heart real quick. We spent Halloween, his first birthday, and Thanksgiving right there on the oncology floor. We were discharged for 2 days and came back for a week for chemo. Then discharged for 2 weeks. We spent Christmas home! And that was the BEST PRESENT EVER! Celebrating Jesus' birthday in our own home surrounded by our parents was PERFECT! We were told on December 14 tests showed Grant was in remission