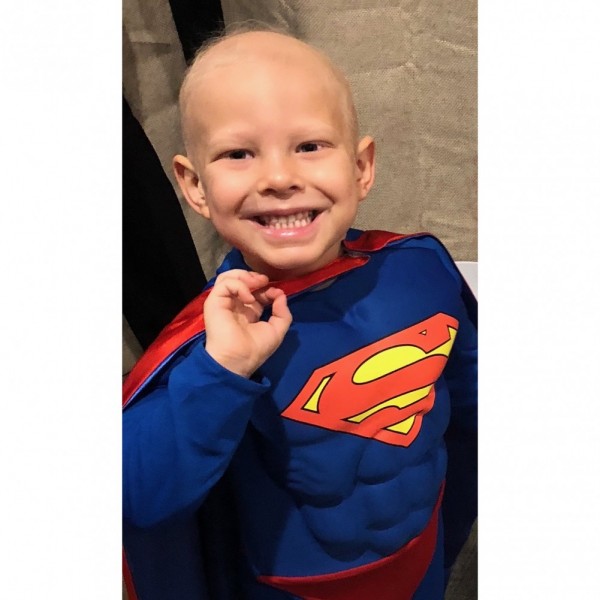 Village of Lakewood, IL, US

The day of Hudson's 3rd birthday, he woke up with a very swollen eye. We brought him to the doctor, as he was diagnosed with pink eye earlier in the week, and he received an antibiotic shot to hopefully get the infection under control. When the eye had not improved the next day, we were sent to the ER. A CT Scan showed that Hudson had peri-orbital cellulitis, and it had not affected the actual eye...which was a huge relief until we were told that his white blood count was zero.  We were then ambulanced to Lutheran General in Park Ridge and underwent many tests over the next couple of days. (Not to mention that the next day was Easter, which we  sadly spent away from Hudson's three older siblings and very worried about what was happening.) On Monday, April 17th, a bone marrow extraction confirmed that Hudson had leukemia. The next day, his port was installed and we found out that it was Acute Lymphoblastic Leukemia, and that it was also found in his spine. This required a more aggressive treatment plan, which required twice weekly spinal taps until three consecutive spinal taps were clear of leukemic cells. Hudson also had to miss his aunt's wedding in Nashville during his time in the hospital, where he was supposed to be a ring bearer. It was an extremely intense and emotional month for all of us. On Day 29, Hudson's bone marrow extraction showed us that, thank God, he was in remission! This was amazing news, but we still had a long road ahead. Due to the leukemia in his spine, we then spent a good deal of our summer in the hospital with four separate 4-5 day hospital stays to administer slow-drip methotraxate to penetrate Hudson's spine. We had an additional stay due to a torn urethra during a catheter placement, and other issues with the catheter as well. Hudson also suffered an allergic reaction to his PEG chemo, which landed us a night in the PICU. Luckily, in the last couple of months, things have gone more smoothly for us, and Hudson has been doing amazingly well. He officially began the maintenance phase of treatment on January 11th, and will continue to receive steroids, antibiotics, and daily oral chemo, along with monthly port-administered chemo, spinal taps every three months, and additional monthly oral chemotherapy medication until June 29, 2020. Thank you for supporting me and the more than 300,000 kids worldwide who will be diagnosed with cancer this year. By sharing the gifts of your time, talent and money with the St. Baldrick’s Foundation, you're supporting research to give all kids with cancer a better chance for a cure.