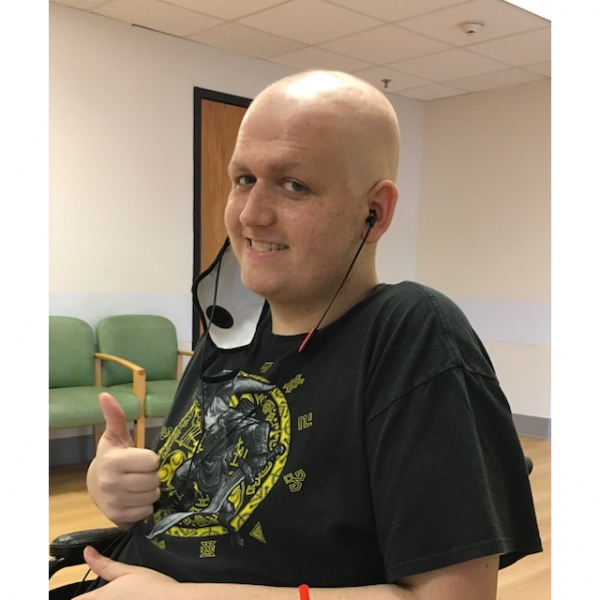 Your life can completely change in just ONE moment in time… That is what happened with Devon on October 6th, 2016. During the summer of 2016, Devon was excited about becoming a sophomore at Louisiana State University, where he had just completed his freshman year at the College of Arts & Design. He was studying Digital Animation and taking his foundational art courses, which he loved.   That summer he started complaining of a backache, which we all thought was pulled muscle from carrying his backpack, computer and art supplies from one end of campus to another each day. He tried all the usual home remedies, but it didn’t relieve the pain. It was during a vacation to do white water rafting that a friend suggested a chiropractor, so upon our return home…off to the chiropractor we went. Devon got relief from the adjustments, but the pain came back within a week. So, we consulted his pediatrician during his routine physical for school. She suggested taking x-rays to see if any underlying problems such as a hairline fracture or that it could possibly be a pinched sciatic nerve. The x-rays showed nothing, yet the pain kept getting worse. By this time, Devon was back at LSU for the Fall semester of his sophomore year. Devon lived in a dorm with no elevator and had to climb up and down 3 flights of stairs, which further aggravated his back. He had a major pain flair at the end of September, which sent us to the ER at our local hospital. X-rays still showed nothing, but blood work indicated elevated inflammatory markers. The ER referred him back to his pediatrician for further testing on possible rheumatoid arthritis. That testing came back negative. His pediatrician opted to send him for an MRI on October 6th, 2016 and that was when a 6cm tumor in his right iliac bone was discovered in his pelvis. The radiologist advised that it appeared to be Ewing’s Sarcoma and immediately called Devon’s pediatrician for a consult. Devon was then referred to Children’s Hospital in New Orleans and we were told to get him there within the next 2 hours for evaluation by the Hematology/Oncology team. That started an 11 month battle that saw Devon undergo induction phase chemotherapy to treat Ewing’s, which was supposed to take 12 weeks. Due to delays caused by slow platelet recovery it took a few weeks longer. Upon completion, scans determined that although the tumor had reduced 2 cm in size, it had moved to his hip joint as well, so surgery was not recommended. We continued consolidation phase chemo treatment and went with 32 rounds of radiation in the hopes of further reducing or killing the tumor. Unfortunately, on June 7th, 2017, Devon got the news that although the original tumor had stopped growth, he had metastasized and now had tumors in his skull, his left jawbone, two left ribs, left arm, lower back and both femurs. The prognosis now was terminal. I don’t know how at 20 years of age you are expected to even comprehend that you have 3 months to live without further treatment or possibly longer with additional treatment. Devon chose hope and continued with additional treatment. Unfortunately, low/slow platelet counts continued to plague his progress. The 2nd chemo treatment was deemed too dangerous due to the potential of him bleeding out due to diarrhea side effects when blood was detected in his stools. After a 2nd consult with another oncologist with Ewing’s experience, Devon’s oncologist opted to try an oral chemo, Votrient, that we hoped would slow down the growth and spread of the tumors. By July, Devon was admitted to Children’s due to increased pain in his back and left leg. As they tried to get his pain under control with numerous medications, patches, IVs, they also tried radiation to his spine. He began working with the Palliative care team as well. While the pain was eventually controlled, Devon lost all feeling from the waist down due to tumor growth in L4. In August, Devon’s power port became infected. He almost died due to sepsis; but defied the odds and continued fighting, and hoping that the treatments would work, including more radiation to his back, skull and jawbone. It was determined that the radiation did not work just before Labor Day weekend. Devon chose to go home on hospice while continuing with his oral chemo and blood transfusions to maintain his platelet levels; but have more time with family and friends for as long as he could. He still hoped to go back to school in the Spring of 2018. We had a big gathering with family and his friends the Saturday before Labor Day. Devon got to play Pathfinders with his friends, and Hearthstone and Smash on his computer and even managed to eat a few bites of the meal he had specifically requested for the occasion. He had a GREAT day and smiled and gave us the thumbs up sign throughout the day. He died less than two weeks later. Devon lived his motto, “Leave Nothing to Chance”, throughout his journey with Ewing’s Sarcoma. He started the Smash Cancer Tournaments/Blood Drives in our local area to encourage blood donations from his peers and community and to raise awareness of the very real need for Blood donations. He shared his story and came to terms with his prognosis and helped us to as well. His humor kept us all in stitches and his hope remained. Today, he encourages us all to continue to embrace life, make the most of each moment and to challenge ourselves and each other to make a difference and Leave Nothing to Chance! Your life can truly change in one moment… Thank you for supporting us and the more than 300,000 kids worldwide who will be diagnosed with cancer this year. By sharing the gifts of your time, talent and money with the St. Baldrick’s Foundation, you're supporting research to give all kids with cancer a better chance for a cure.