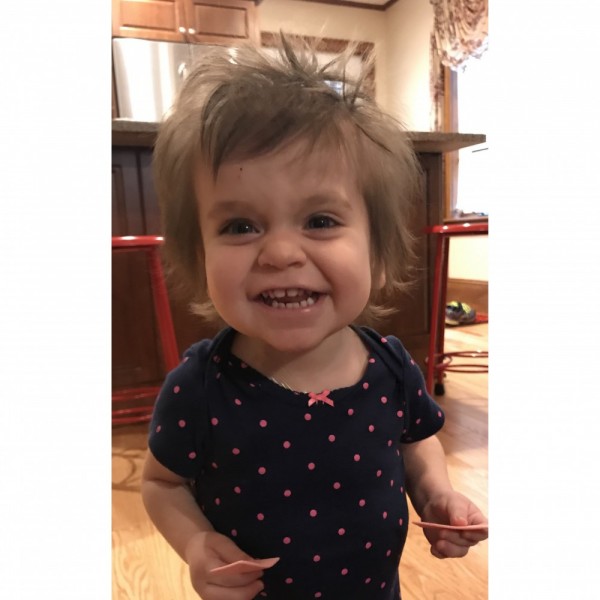 Mya was the youngest daughter Steve and Brandi Corigliano, and youngest sister to Madison, Emma, Taylor and Lydia. She was born with a head full of thick brown hair that stood straight up, and a matching spunky personality. At 3 months old after a week of stomach bug symptoms she was diagnosed with acute myeloid leukemia (AML). Soon after it was discovered that Mya’s specific AML was rare, aggressive and required a bone marrow transplant. Mya was admitted to Upstate Golisano Children’s Hospital in Syracuse, NY where she would begin her induction chemo to prepare for a bone marrow transplant. Her leukemia had spread to her spinal fluid, so on top of aggressive chemo she required a spinal tap with spinal chemo every 4 days. Mya was a champion through 3 rounds of chemo in Syracuse. She was in the hospital for 28-30 days with each round of chemo. Despite all of her doses of chemo, dozens of blood/platelet transfusions, multiple trips to the operating room, and too many NG tubes and needle sticks to count, Mya always had a smile on her face, she never let anything keep her down long, she stole the hearts of every doctor and nurse. Mya was so fortunate that one of her sisters was a perfect match for transplant! December 6th 2016, she made the trip to Philadelphia for transplant. The chemo to prepare for her transplant, and the side effects were intense, she physically struggled, but maintained a fighting personality and her smile. She recovered and was doing so well that she was discharged from Children’s Hospital of Philadelphia earlier than expected. February 23rd 2017, the day Mya finally came home from Philadelphia was supposed to be the happiest day ever. She was finally home, and we were finally all under the same roof! But unfortunately that very same night her oncologist called to tell us that her bone marrow biopsy they did before we were discharged already showed signs of relapse. We were told that it was too soon for any treatment so we needed to stop all of her transplant meds, and her only chance of surviving was if her sisters cells attacked and killed her cancer cells, and that is exactly what happened. Mya was back in remission! Oh how we enjoyed the next few months! June 26th, after just a few days of not feeling well, it was discovered that Mya was in a full and aggressive relapse. Her body wasn’t stable enough for another transplant, and every oncologist believed that she would not survive aggressive chemo, that she would never leave the hospital. Our remaining options were to stop all treatment and they expected her to live 2 weeks, or to start palliative chemo which would keep the leukemia from taking over. Her oncologist felt she could have 6 happy, enjoyable months with palliative chemo. She started palliative chemo the next day. Mya ended up dying December 19th 2017, almost exactly 6 months after starting palliative chemo. It may sound like a strange descriptive word but the next 6 months were nothing short of amazing. We were together as a family, and enjoyed every minute with her. We made a Mya bucket list and checked off every wish! We watched Mya flourish, grow, walk, talk, she loved to be mischievous and laughed hysterically when she was caught doing something bad. We watched a superhero in action, she brought together an entire community, taught so many people how to make the best of the worst situations. How to live life to the fullest. Right until the very end, Mya had a spunky personality, a fighting spirit and a big smile on her face. Mya is our hero, and we are honored to be her family We are sharing Mya story, because no kid should have to fight this beast and then die, no parent should bury their child. Our daughters future, her life was taken. Pediatric cancer needs more funding and more research. Let’s stop this beast from winning. Together we can stop cancer!