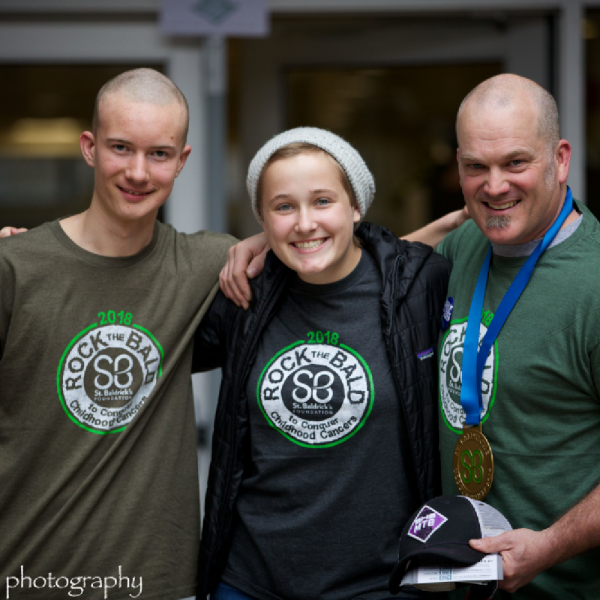 On August 24, 2015, I was diagnosed with metastatic Ewing's Sarcoma in my pelvis. After my 7 month battle, I was declared NED (no evidence of disease) in April of 2016. On August 10, 2017, a follow-up scan showed two tumors in my lungs. It was confirmed to be relapsed Ewing's on August 17, 2017. I started treatment again on August 29th, 2017. After a second battle against cancer, that included chemo, a clinical trial in Boston at Dana Farber, two lung surgeries and six weeks of radiation. I was declared NED once again last August.

Here is a quick summary of what’s been going since the last St. Baldrick's event:  I fell off my bike over the Memorial Day weekend and developed a pneumothorax (partially collapsed lung), but rode the Courage Classic in late July none the less. The pneumothorax healed by August and I also got word that I was again showing no evidence of disease (NED). I am currently still NED.  I had surgery to remove my port last November and I will continue to get scans every 3 months. Also, I am taking a maintenance biological (non chemo) drug that has shown promise in treating patients whose sarcoma has relapsed. The drug, Pazopanib, is pretty easily tolerated for me, but has side effect of giving patients grey hair. My hair is actually turning white. I’d shave my head for St. Baldrick’s but I have had enough of being bald.  ;-)  I raced 3 of 4 high school mountain bike races for Boulder High in 2018. My goal was to finish the races, and I did that, despite some tough racing conditions including 80 degree temperatures. I qualified for the state championship in Durango and finished that race too! So here I am, trying to raise funds for childhood cancer researchers. I appreciate your support. This organization is crucial to the future of kids like me.  Thank you for your donation to St. Baldrick's.