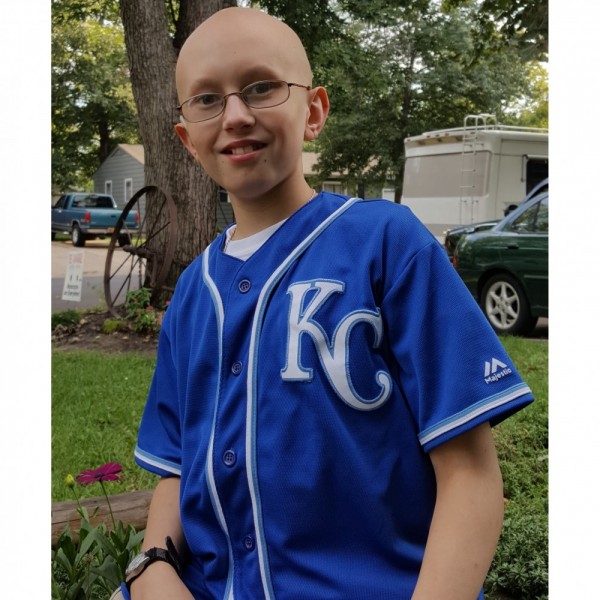 Austin was having severe vision problems in March of 2016. (he was 12 years old) After an eye exam and talking with his pediatrician, we were sent to Children's Mercy Hospital. They did tons of tests, multiple MRI'S and CT scans where they found a large tumor in the pituitary region of his brain they thought was benign. They decided to do surgery to remove it. During surgery they discovered it was a highly malignant and had to stop. They did remove enough to relieve the pressure on the optical nerves. After more tests he was diagnosed with an Endodermal Sinus Tumor of the suprasellar region. It had gotten so large that it stretched the optical nerves and surrounded the carotid arteries and destroyed his pituitary gland. It is a rare tumor that affects about 150 children in the U.S. a year when puberty starts. We found out that it responds well to chemo and radiation so Austin spent the next 9 months receiving chemotherapy and radiation at Stormont Vail and KU Cancer Center.As a result of the area of the tumor he has Panhypopituitarism with Diabetes Insipidus and is blind in his right eye.     Even with all he has been through he is still outgoing, funny, witty and has such a positive attitude. He loves playing basketball, riding his bike and is ready to take on the world!Today he is 6 months in remission and will be starting 8th grade!!Thank you for supporting me and the more than 300,000 kids worldwide who will be diagnosed with cancer this year. By sharing the gifts of your time, talent and money with the St. Baldrick’s Foundation, you're supporting research to give all kids with cancer a better chance for a cure.