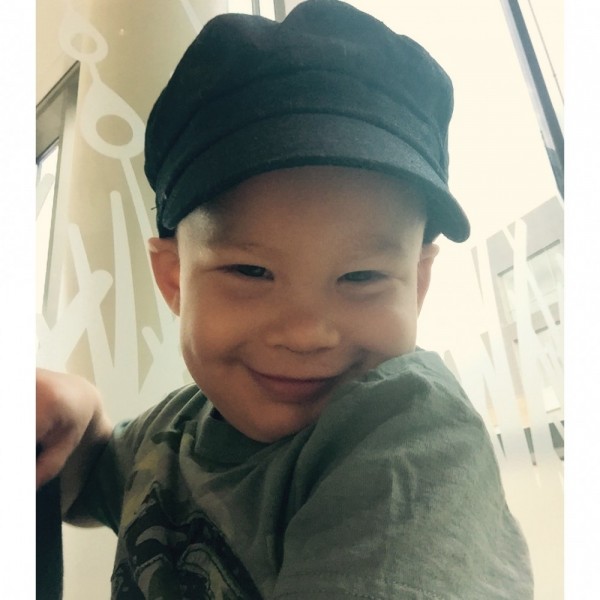 Thank you for supporting me and the more than 300,000 kids worldwide who will be diagnosed with cancer this year. By sharing the gifts of your time, talent and money with the St. Baldrick’s Foundation, you're supporting research to give all kids with cancer a better chance for a cure. My family and I were working as missionaries in the Philippines when in June of 2016, my parents took me to our family pediatrician over concern of some troubling symptoms I was showing. I was only 23 months old but had a clumsy, stumbling walk that grew worse each day to the point of me constantly falling down. I had always been a friendly, happy baby but over the last month had been increasingly irritable and only wanting mommy. Finally my parents grew really concerned when they noticed I cried in pain and rolled my eyes back in my head whenever I went from sitting up to laying down. Our pediatrician, upon hearing of my symptoms, immediately referred me to be seen by a pediatric neurologist. The neurologist, after hearing of my symptoms and examining me, ordered and MRI. June 17, 2016 is the day that changed our lives forever. Soon after going under anesthesia for an MRI, in Bacolod City, Negros Occidental, Philippines, my parents were notified by the MRI technician that the scans revealed a large mass in my cerebellum. This tumor was blocking the flow of cerebral spinal fluid in my brain, causing me to have swollen ventricules caused by hydrocephalus. My parents were devastated, confused, and uncertain of what all this meant. It would not be until three days later that the official report on the scans would come through the radiologist in the Philippines, but thankfully pictures of the scans were given to my parents that day and they immediately contacted family and friends in the USA asking for prayers from everyone and advice from medical contacts. A respected radiologist in the States evaluated my scans and by the morning after my MRI they were given the terrible news: large brain tumor causing hydrocephalus, 90% chance of being cancer, very likely to be the highly aggressive medulloblastoma, surgery needed as soon as possible. Within just two days, I would be on a flight with my mom, dad, and three big sisters (leaving our life, work, and home of six years behind, having no idea of what the scary future held) rushing back to the USA straight to Cincinnati Children's Hospital for surgery. It was a great risk to even take me on an airlines due to the changes in cabin pressure in flight further worsening the delicate condition of my hydrocephalus, but my parents knew, the best hope for my survival was to get me to the US to a top children's hospital there. Through much prayer, and with the help of steroids relieve some of the swelling on my brain, I survived 18 hours of flight time, and over 24 hours of travel time when we finally reached the Emergency Room of Cincinnati Children's Hospital where they were waiting for us. We were impressed that the head doctor of neuro oncology met us there in spite of the late hour, to warmly welcome and assure us and view Jonathan's scans. We were sent straight to the PICU and I was in surgery the very next day for an external ventricular drain to be put in place to relieve the hydrocephalus. One week later on July 1, 2016, I was in surgery for 14 hours for a craniotomy to remove the tumor. Before surgery, my neurosurgeon was concerned that they may not be able to remove the entire tumor due to it appearing to be attached to my brain stem. However, we thank God, that after the long, difficult surgery the surgeon came to tell my parents that it went well and the entire baseball sized tumor was removed! My family was so happy to hear this good news, but the battle was far from over as pathology would soon reveal the dreaded news that the the tumor was in fact the highly aggressive, fast growing medulloblastoma. It took four weeks of recovery from surgery which I came out of like a newborn in my abilities...I had physical, occupational, and speech therapy to help me learn to swallow, talk, hold my head up, sit up, crawl, stand, and walk all over again. I had just a couple weeks out of the hospital before starting my long, difficult journey with chemo to hopefully eradicate any remaining cancer cells in my brain to ensure the awful medulloblastoma does not relapse. At relapse, only ten percent survive this awful disease. With my chemo regimen, they say my chances of survival are 72%. I made it through three tough high dose chemo cycles still smiling and playing. I'm now in the midst of eight maintenance cycles. My parents hurt to see me go through so much, but they trust God with the final outcome and are encouraged by my innocent bravery and resilience through it all.