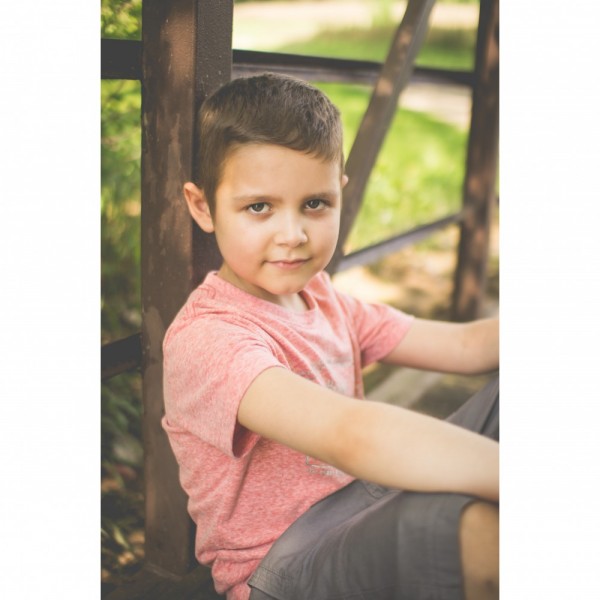 Thank you for supporting me and the more than 300,000 kids worldwide who will be diagnosed with cancer this year. By sharing the gifts of your time, talent and money with the St. Baldrick’s Foundation, you're supporting research to give all kids with cancer a better chance for a cure. Isaac was 2 when we heard the words no parent should ever hear. "Your child has cancer". Isaac was rushed into the icu where he was sedated, put on dialysis, pheresis and intubated. He spent 5 days sedated and we were unable to touch or talk or else he would wake up. The doctors explained to us that he is at great risk, his white blood count was off the charts at 674,000. This leads to, strokes, heart attacks, brain damage and more. They started chemo right away. They told us he would be in the hospital after icu for a minimum of 3 weeks. He went home just 6 days later! His counts came down. He woke with no side effects from sedation. He was able to walk a few days in. They called him the walking miracle and people from around the hospital came to meet him. His recovery is not common and I think God everyday for the work He has done in Isaac. Remission came 2 weeks later and Isaac brought many smiles to the clinic staff. He was always so happy (unless he couldn't eat or drink!) and not afraid of procedures. The 3 1/2 years of treatments seemed like forever. Many hospital stays, fevers and illnesses. 8 rounds of brain radiation was not fun either. Isaac started kindergarten and made many friends. We lived life as normal as we could putting the cancer world farther behind us. In January 2016 we were forced back into that scary, unknowing world of childhood cancer. After 5 1/2 years being cancer free it had returned. Chemo started right away and this time it was different. Instead of a gullible little 2 year old he is now 8. He knows and sees things in a whole different light. It was harder, more painful. The doctors explained to us that he would need a bone marrow transplant to survive. Because there must be a glitch in his marrow which causes it to create cancer cells. We were so nervous of the unknown. We were well aware of the risks as we have watched dear friends children go through this. We started preparing for transplant. March it was scheduled for. We booked a trip to Disney for one last fling before Isaac has 100 million and 1 restrictions. Well Isaacs body had other plans. 5 days before we were to fly out he was sedated for a procedure (many many of these so no biggie!). His blood pressure dropped, his body went into shock. They couldn't get it to rise with medication. They put him in icu. His heart rate wacky. Blood pressure so low. They decided to put in a temporary pacemaker, that helped regulate his heart. Then it turned worse. He had myocarditis. The heart specialist looked at me and said we need to put a heart catheter in. "This could save him or take him" I was numb. The procedure went smooth and now his is intubated, resting, letting his body heal. A few days later he was awake and eating. His transplant got rescheduled for April. He needed his heart to heal and be strong for it. We were able to rebook our trip (we had purchased travel insurance!). We had so much fun and it was so worth every penny to see Isaac happy. April 20th 2016 he received bone marrow from a stranger. The donor was a 100% perfect match. Transplant went great, he slept through it all. He recovered quite nicely except for the painful mouth/throat sores. We spent 3 weeks in the hospital and almost 3 weeks at the hospitals hospitality house. Isaac couldn't go anywhere and he could eat a lot of his favorite things. (Salad and fresh sweet peppers). The food restrictions were the worst for him. Slowly he was able to go to a park or to someones house we trusted that was clean. He was able to return to school in October. He missed half of 3rd grade but he got right in there and did great! Isaac is now almost 10 and thriving! He has overcome so much and is living a "normal" kid life!!