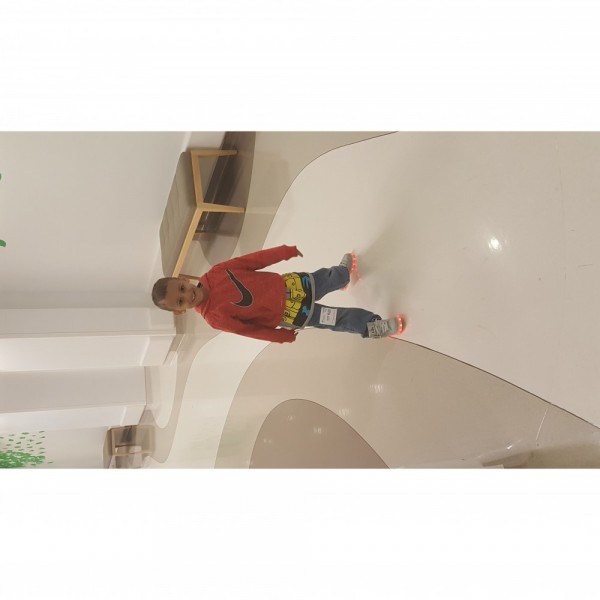 It all started with his leg hurting. I just thought he twisted his ankle while playing with our dog Bosley. He was limping a little. We went to the store by the time we got home his leg hurt so bad he wanted to crawl. So I called the dr and made and appointment. We went the next day. They did x-rays found nothing. So we went home. His leg was still hurting. When he was getting out of the bath that night we noticed a lump in his groin area. My mom is a nurse and just had a bad feeling as soon as she saw it. I was trying to think of everything but that. I said I was tickling him maybe it is just swollen I didn't want it to be true. He had an appointment that Thursday. We went they did blood work and sent us home. We got a call that said everything was ok. Then a couple days later I got a call that said something wasn't right. So we went to get more blood done. I was praying that it wasn't cancer. They sent the bloodwork to Pittsburgh, they said everything was ok. But our dr didnt like that he still thought something was wrong. He sent the blood wotk to Columbus. They told us to get there asap. We got to Columbus and got the worst news any parent could get. Jaymasen was diagnosed with ALL ACCUTTE LYMPOBLASTIC LEUKEMIA. That had to be the worst day. It felt like it was a dream that couldnt be true. My beautiful boy. All the worst things go through your mind. But Jaymasen is a super hero! He is fighting this like a champ. He started his treatment on Feb 2 2016, 4 days later the lumps were gone. We had to stay in the hospital for awhile. He had to through rounds of chemo,spinal taps,taking meds was a chore believe me. But he did it. We made it. Everyone at Nationwide childrens in Columbus are awesome. It makes it a little easier. By April they said he was in remission. He is the strongest 3 year old I have ever met. He is my inspiration. By looking at him you wouldnt think he is fighting LEUKEMIA. He is in maintenance now. We go once a month now instead of every week. The power of prayer is amazing. We are going to keep fighting and beat cancer. Thank you for supporting me and the more than 300,000 kids worldwide who will be diagnosed with cancer this year. By sharing the gifts of your time, talent and money with the St. Baldrick’s Foundation, you're supporting research to give all kids with cancer a better chance for a cure.