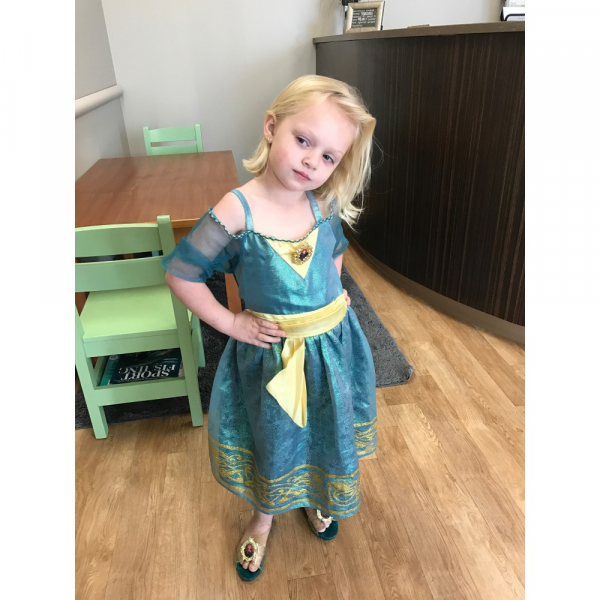 At 9 months old a tumor was detected on Charlotte's right adrenal gland. Surgery was successful and the tumor was completely removed. It too was diagnosed as cancerous (Adrenal Cortical Carcinoma or ACC for future reference) but doctors told us since they removed it in its entirety no other treatment was necessary. We continued our follow ups with the endocrinologist and her oncologist over the next few years who said it was just a rare one time thing and we had nothing else to worry about as far as her having any other types of tumors or cancers. My wife and I were blissful in our ignorance, that is until My wife went for her BRCA2 test in late 2015. This is a genetics test looking for a gene mutation associated with breast/ovarian cancers. Her mother had tested positive therefore they recommended she be tested. Fortunately she was negative. However while speaking with the geneticist and giving family medical history she mentioned Charlotte's ACC. Apparently a lightbulb went off inside the geneticists head. She strongly recommended we have a genetics test done on Charlotte to check for a different type of gene mutation associated with her ACC. We asked Charlotte's original oncologist and after him-hawing around with him and insurance we made the decision to get the test done. We took her for her test in early November of 2016. We received the results from her genetics test on December 9th 2016. Unfortunately Charlotte tested positive for a rare genetic mutation to the p53 tumor suppressor gene. This mutation is known as Li-Fraumeni syndrome (LFS) and only affects 500 people worldwide. Basically Charlotte is highly susceptible to many types of cancers and tumors because her body doesn't "break them down" like you or I who don't have the mutation. Typically LFS is an inherited genetic mutation so My wife and I were tested. We are both negative which means Charlotte is de novo (a new mutation, meaning she mutated the gene on her own). Although Charlotte's diagnosis was still gut wrenching our negative results were a small consolation that perhaps her brother or any future children* will not have the mutation. We will still have he/them tested to be certain though. Ok back to treatment for Li-Fraumeni. Unfortunately there is no treatment. Only constant monitoring and early detection of any types of cancer or tumors so treatment can begin ASAP. The regimen for Charlotte was set up to be blood draws with abdominal ultrasounds every 3 months and annual full body MRI's, this will be for the rest of her life. On December 22nd 2016 we went in for the first annual MRI and they found the brain tumor. The brain tumor was removed on January 9th 2017 and Charlotte started her chemo treatment a few weeks later. The chemo regiment is intense and if found to be working will last approximately 18 months. If after her scans the chemo is not working we will re-evaluate the treatment plan and adjust accordingly. Losing her hair has been difficult to explain to her whereas some days she's ok with it and other days it really upsets her. Thank you all for your support of the St Baldricks foundation and childhood cancer research. Thank you for supporting me and the more than 300,000 kids worldwide who will be diagnosed with cancer this year. By sharing the gifts of your time, talent and money with the St. Baldrick’s Foundation, you're supporting research to give all kids with cancer a better chance for a cure.