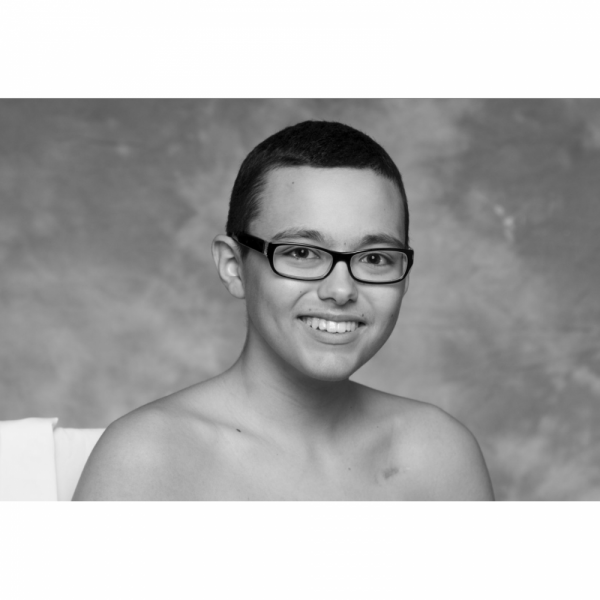 Thank you for supporting me and the more than 300,000 kids worldwide who will be diagnosed with cancer this year. By sharing the gifts of your time, talent and money with the St. Baldrick’s Foundation, you're supporting research to give all kids with cancer a better chance for a cure. Christian Larson is a 14-year-old boy that was diagnosed with Ewing’s Sarcoma (a rare bone cancer in his left pelvic bone) the weekend of 4th of July, 2015. He has gone through various tests, scans, surgeries, a year of chemotherapy, hair loss, a major surgery removing a large portion of his left pelvic bone and part of his socket in November 2015, physical therapy, occupational therapy and so much more. He enjoyed his summer break by going on a road trip to Colorado with his grandma and two friends. When school started in September 2016, he started to experience some back pain here and there and then progressed to extreme constant pain in October and November. On Friday, November 4, 2016, he woke up to not being able to feel his belly button and below. They did a sedated MRI and pulled him out half-way through the scan to bring him to emergency surgery to remove the tumor they saw pressing on his spinal cord. The tumor removal surgery was successful and he healed up well from that surgery. While still at Children’s Hospital in Minneapolis they continued with a PET scan, and a couple more MRIs to find that Ewing’s Sarcoma has returned. Not only was it found on his spine, but it’s in his right shoulder bone, his right femur and showed to be in his bone marrow as well. Since November 4th, Christian has been forced to not only take oral chemo drugs (extremely bad tasting), but also do a lot of physical and occupational therapy work. He has been working so hard and has been put through so much. Christian was transferred to Gillette Children’s Specialty Healthcare in St. Paul on November 17th to get more intense physical and occupational therapy, recreational therapy, school tutoring, psychology meetings and music therapy. He has met new kids and staff and they all love him. He was discharged in December. Christian continued physical and occupational therapy outpatient at Courage Kinney Rehab, he got chemo at Children's Hospital and Clinics in Minneapolis, and had numerous radiation treatments at Abbott which continued for 2 more years. His cancer came back every time somewhere else in his body.  In September 2018, Christian started a new symptom, difficulty breathing. It wasn't a big problem at first, but got worse and more often. We went to Children's ER to learn that it was in his lungs and he won't be leaving the hospital this time. He was blessed to have so many family, friends, and staff (also friends) to surround him every day and show him love and compassion, but mostly humor. Christian kept the humor going even when it was hard to breath. Jesus came for Christian in such peace while he was with his loving mother, grandmother, cousin and nurse on September 20, 2018. He is forever smiling and walking with Jesus.