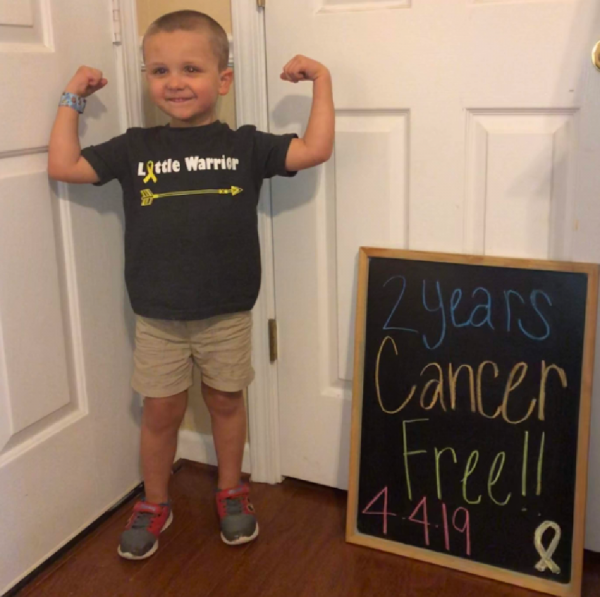 At Colt’s 15 month checkup, we mentioned to our pediatrician, Dr. Ward, how we thought Colt’s left eye was going inward. Dr. Ward noticed it as well, but did not believe it to be a major issue and we decided to continue to watch it. A few months passed and we went in for Colt’s 18 month appointment. Immediately, Dr. Ward noticed the eye and suggested we go see Vanderbilt Eye Institute but that it was probably just a lazy eye and he might need a patch.
On October 3, 2016 we went to the eye institute and Colt had an eye exam. After having Colt’s eyes dilated, the doctor stated he saw a tumor on Colt’s retina and explained that there was a 50/50 chance it was cancer.
We returned to Vanderbilt Children’s Hospital on October 10, 2016 for a more intense eye exam done under anesthesia by a retina specialist. When the exam was finished, we were met in a consultation room by the specialist, Dr. Daniels, and received news that we will never forget. Colt had a very rare childhood cancer called retinoblastoma. He also had one large tumor on his retina that was beginning to break off into smaller tumors. We were told that Colt would need chemotherapy to shrink the tumors and it needed to be started immediately due to the size.
Three days later was Colt’s first chemotherapy treatment. The doctors administered the treatments through a main artery that runs from his groin to his eye so that they could insure the chemo went straight to his eye. The treatments took three hours and after, he had to stay under sedation for 6 hours to prevent blood clots. It never got easy to see our son lying in a bed with tubes and IV’s hooked up to him.
On April 4, 2017, after 6 rounds of chemotherapy and 6 tumors, we received news that Colt did not need any more chemotherapy treatments! However, the doctor’s visits don’t stop. We continue to have eye exams under anesthesia every 2-3 months and MRIs under sedation every 6 months until Colt is 5 years old.
Sadly Colt no longer has vision in his left eye but he would never let you know that. He is just as energetic and loving as any other two year old. He plays hard and enjoys rough housing; he’s a lover of all things football, ninja turtle, Toy Story, and Monster trucks. He’s truly a blessing to watch grow and become smarter, and we cannot thank God enough for letting us be his parents.
Thank you for supporting me and the more than 300,000 kids worldwide who will be diagnosed with cancer this year. By sharing the gifts of your time, talent and money with the St. Baldrick’s Foundation, you're supporting research to give all kids with cancer a better chance for a cure.