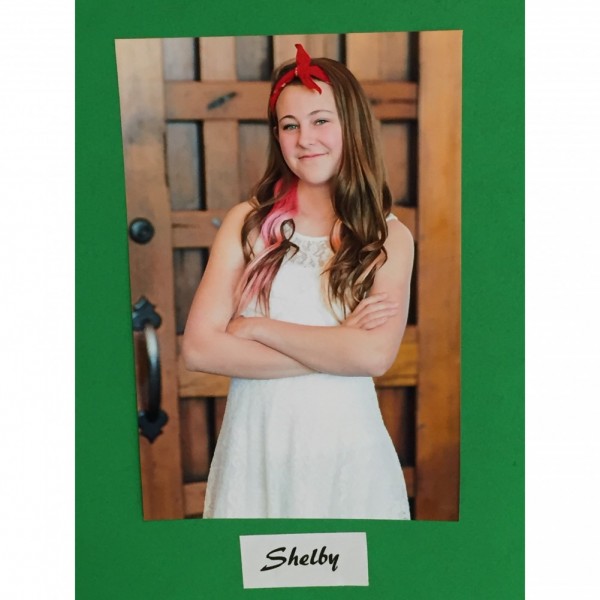 Hello! I am Shelby Martyniak. I have incurable Thyroid cancer that has spread to both of my lungs and the right side of my neck.Everything started four years ago on December 27, 2011, when I went to get a sport’s physical and my doctor found a lump on the right side of my neck. She told us that she was going to have us get an ultrasound of it to see what it was. From the ultrasound I went to get a blood draw and then my doctor order a Biopsy. The biopsy is supposed to take about a week to get the results back, I got my back the next day. On January 18, 2012, I was diagnosed with Pediatrics Papillary Thyroid Carcinoma which is dramatically different from Adult Onset Papillary Thyroid Carcinoma, I was only 11 years old. On March 21, 2012 I had surgery at The Children’s Hospital Colorado for a right neck dissection and the removal of my thyroid. I was in the hospital for six long days, when I was finally released I was home for one night before I suffered from complications and was admitted back into the hospital for another three days. The summer of 2012 I went to MD Anderson in Houston, Texas for radiation treatment, scans, blood draws, and ultrasounds. Because my cancer is so rare in children I had to move to a hospital that specializes in it. It's been a long ordeal with my cancer numbers being erratic over the last four years, I’ve since had more radiation, x-rays, CAT scans, SPECT scans, blood draws, and ultrasounds. So I live my life day to day. Because of everything I have been through I have come up with the motto “If They Can I Can”. I try to live my life to the fullest and this motto helps keep me going. I believe that just because kids have cancer doesn’t mean we can’t still do things that healthy people can do. Kids with cancer are strong, courageous, and resilient. We are constantly knocked down but we will always get back up and keep fighting. I feel like my purpose is to help those going through tough times by raising money for their dying wishes, to raise money for cancer research, to raise money for childhood cancer charities, for families medical bills, and spreading awareness. I have become stronger emotionally and mentally and I want to help as many people as I can. A lot of times people look at cancer patients that haven’t lost their hair or that don’t look sick as if they maybe really aren’t sick. Cancer treatment comes in many different packages, some cancers only radiation works and in other cancers only chemo works. In my case I had radiation so I didn’t lose my hair. A few things all cancer patients go through is fear, stress anxiety, and some finally come to a place of acceptance. Through this journey I have learned that everyone is fighting their own battles even though you can’t see them.