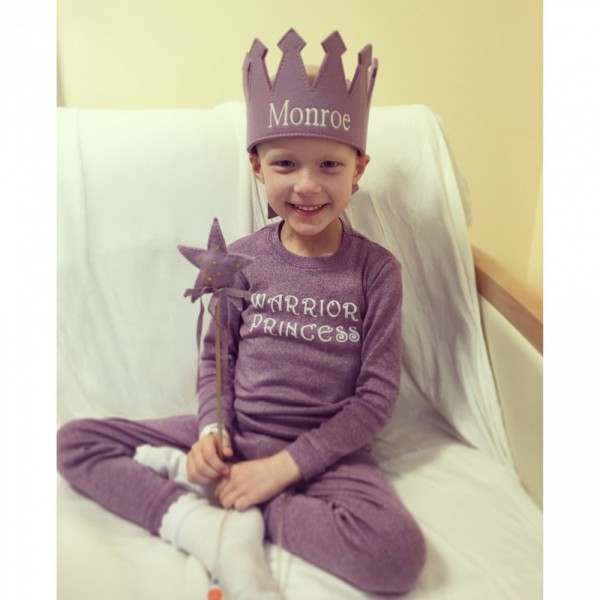 Monroe Okola was born on August 15th, 2011… she is 4 years old. Monroe is the daughter of Aaron and Leah Okola. She has a 15 year old brother named Jake and a 10 month old sister named Arden. Monroe is a beautiful, sweet, energetic and happy little girl who loves Disney princesses, riding her tricycle, going to pre-school, and buttered noodles. In early August “RoeRoe” started to not feel so well… she was lethargic, lost her appetite and just seemed like she wasn’t happy. Several doctor visits showed nothing really wrong. Then she developed a limp and a lump was discovered on her neck… this time she went to see a pediatric hematologist/oncologist… we knew something was very wrong. Monroe and her entire families world was turned upside down when on October 9th, 2015 they heard the words that no parents should ever have to hear… “your child has cancer”. Monroe was diagnosed with stage 4, high risk neuroblastoma. The doctors said she had a 50% chance of long term survival… The family immediately started to frantically research her disease and what was the best course of action. They called and emailed hospitals all over the country who were specialists in neuroblastoma. It is a relatively rare form of cancer, striking only about 400 to 700 cases a year in the United States. The problem was that the family had Kaiser insurance and Kaiser generally does not allow you to go outside of their network. Kaiser has wonderful doctors and does great work, but Monroe needed a specialist. After some intense research, the decision was made that Monroe needed to be treated at Memorial Sloan Kettering Cancer Center in New York City. They treat more pediatric neuroblastoma cases than any other institution in the world and have a team of doctors who treat only neuroblastoma patients. Monroe is going to New York City asap… November 1st, 2015 Monroe, Leah and Aaron arrive In NYC to start her treatment. They left behind their business and jobs as well as family and friends and all that is familiar to them… Monroe has received several rounds of high dose chemotherapy. She is having major surgery on January 11th to remove the tumors in her abdomen and her left adrenal gland is also being removed because it is covered in tumor. After she completes chemotherapy, she will have to endure radiation and then immunotherapy. The doctors have said this could be a 12 to 18 month process. The Okola family needs all the love, prayers and support they can get. Monroe is fighting for her life every day while the family deals with the incredible emotional and financial pressure that this horrible disease is causing…