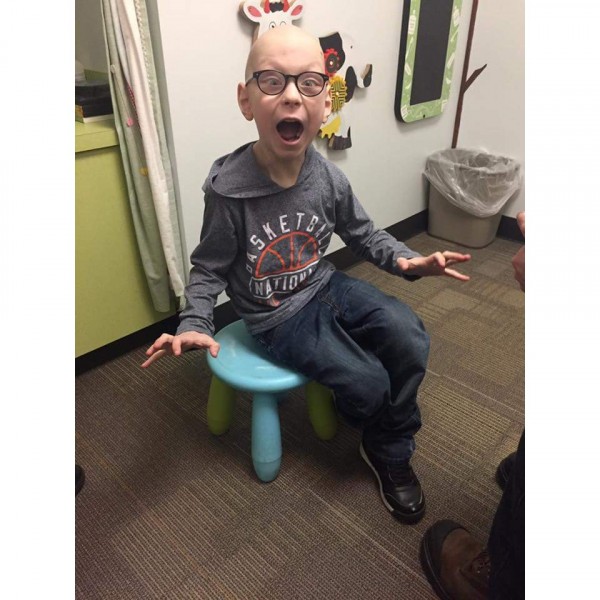 Just before Christmas 2017, Gabriel left us to be with God in Heaven. I Will Follow You Anywhere; When I started Gabriel's Facebook page (https://m.facebook.com/GabrielsGiantJourney/ ) I had no idea what it meant. This page began to celebrate his journey through gigantism. We had no idea where it would go.  I never in a million years would have thought we'd be here. Battling a second cancer, for a third time. Thinking about what he has overcame, brings me to tears. My son has the most beautiful heart you will ever have the pleasure of knowing.  Before we came here, amazing friends of ours held a benefit for Gabriel. Lonnie pulled me away and told me this. He said "Kassie, it's not about what Gabe needs done in NYC, it's about who he needs to touch there." I don't think anything has ever resonated quite like that phrase. It made me think. And as we've led lives here in New York for the past month, I can't put into words how true that statement was.  First we wondered down the neighborhood we're staying in he first day we were here. We found a cute little diner that reminded us of home and went in and sat down. There we met Donna. A waitress and long standing citizen of NYC. As we spoke to her I noticed she was wearing a yellow cancer ribbon. We told her why we were here and we fell in love with her to the point New Yorker self. There was something beautiful about her outer exterior and her roughness. But in the presence of Gabriel she melted. Her heart broke when we told her 3 weeks later that Gabriel would once again begin another battle with cancer. She took that pin off, one that had meant so much to her, and pinned it on my son, while crying. She was our first face here and she's left a lasting impression on us. Next we met a wonderful volunteer in Central Park, who clicked with us immediately. We exchanged numbers and just the other night he invited us into his home and made us a home cooked meal. Next we met a cab driver. A 75 year old man, from Russia. He met Gabriel that night and gave us so much hope. He stopped the taxi in the middle of the road and kissed my beautiful son on the head and prayed for him. God knew we were trying to adjust and sent him to us. I know it. Then we met a man who worked at the Health Store down the road. He immediately took to us and went and got his manager. His manager sought us out in the store, he talked with us about Gabriel and our journey, and gave Gabriel some variety items with the stores logo on it. Gabriel hugged him and the man began to cry. As I walked down the isle a bit more the man told my father that he had lost a son at 6 to cancer. And that Gabriel's hug was the warmest thing he'd ever encountered.  Here at the Ronald McDonald house, we met a woman who is employed here. She was the first face we saw when we arrived here. Her name is Nadia. She touched our lives in so many ways. She has been the face we've been happy to come home to. The normalcy we sought for so long. She makes this big scary place so much more bearable. We are so thankful for her and the love she shows our son.  Today while on the ferry we met a woman who was in NYC visiting. Come to find out she was a teacher, who taught children with disabilities. She asked for a picture with Gabriel and hugged him so tight. We exchanged contact information. As we walked away I just couldn't believe how many lives my son has touched.  I've also met a battery of woman, cancer fighting momma's, who have changed my life. I've forged more relationships under the roof of the Ronald McDonald house than anywhere in my adult life. They were there standing outside the clinic when we were told Gabriel had developed a secondary cancer. As I walked out I walked straight into their arms. Into arms of women who not only understand, but whose hearts broke right there with mine. They stayed for hours with us, even though their appointments were over. Just to be there and let me know I'm not alone.  I will follow my son wherever his journey takes us. I will follow him forever. Through every entangled winding road we find ourselves on. He has my whole heart, and because I have his whole heart, which means I will never ever give up.  In the light of the darkness we recognize that this second diagnosis, isn't a death sentence, it's an opportunity. A chance for Gabriel to touch even more lives. To leave lasting impressions on strangers who God has chosen. Gabriel is the light in that darkness. He has so much more to give.  We had no idea where this journey would take us. We had no idea we'd be where we are today. But as we ride on the coat tails of a hero, I can't help but stop and thank God. I know in my heart my son is an angel. Put here on earth for a purpose. His life has meaning. His trials and tribulations are not forsaken. He's changing the way the world loves. One happened encounter at a time.  ❤❤❤❤ Thank you for supporting me and the more than 300,000 kids worldwide who will be diagnosed with cancer this year. By sharing the gifts of your time, talent and money with the St. Baldrick’s Foundation, you're supporting research to give all kids with cancer a better chance for a cure.