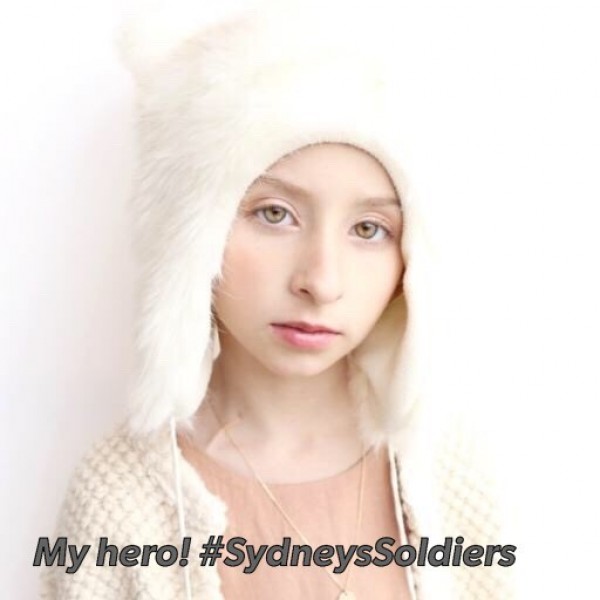 Thank you for supporting me and the more than 300,000 kids worldwide who will be diagnosed with cancer this year. By sharing the gifts of your time, talent and money with the St. Baldrick’s Foundation, you're supporting research to give all kids with cancer a better chance for a cure. Sydney was diagnosed with a Stage 4 Favorable Wilms' tumor on March 1, 2015 at Mercy Hospital, St. Louis. The next day, she was taken to surgery to have her right kidney, adrenal gland and lymph nodes removed. On March 5th, she was transferred to Cardinal Glennon because her other kidney had failed and the doctors believed that she needed to start dialysis. Once at Cardinal Glennon, the doctors gave her kidneys a few days to start responding on their own again, which they did, and so we didn't have to start dialysis. She was transferred back to Mercy for a few days, and then released. Sydney started chemo and radiation, and was doing very well with her treatments, but had a severe allergic reaction to one of the drugs given to help protect her organs from the radiation and she went into anaphalyctic shock and was put in PICU, and was intubated at Mercy, where we were told to prepare for the worst. She was in the PICU for 8 days before they realized that she was also septic because of an infection in her port. Her port was removed and Sydney immediately started recovering. We were told during the first week of June, after scans that there was NED, but that we would complete the treatments that were already planned. At the end of June, Sydney was readmitted to Mercy with abdominal pain and scans revealed that a new tumor had grown on her bladder and bowels. The new tumor was removed, and a new treatment plan was set. Sydney would have to have at least 5 rounds of a new chemo, and then she would be admitted for stem cell transplant at Children's hospital. This is where we are now. Sydney has completed all her chemo, and she is scheduled to be admitted to Childrens on October 19 for transplant. UPDATE: Sydney had her stem cell transplant, with few complications, and was released from the hospital on November 13, 2015. She has done really well, only hospitalized once since release, and that was for pneumonia. She is doing a clinical trial, taking a small dose of a chemo drug as maintenance. Wilms' patients, or any solid tumor patients usually don't have maintenance phases but the trial is to see if they will help! Keep Sydney in your prayers PLEASE! Update: On July 13, 2017, Sydney relapsed to her liver and diaphragm. We started treatment but first scans after 2 rounds of chemo showed tumor growth. She had part of her liver removed and part of her diaphragm, and did 15 rounds of radiation. Scans on Jan 3 showed tumor had quadrupled in size. Sydney has no more options and is now working on her Bucket List.