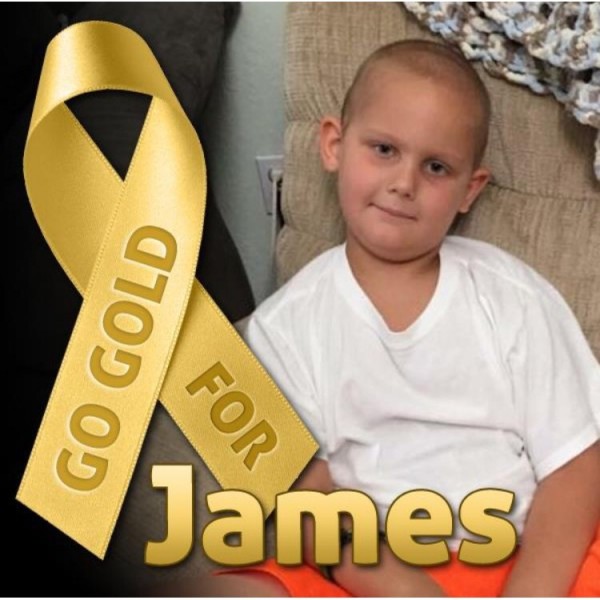 Well even though September is coming to an end , for some of us childhood cancer awareness does not end there. Just like us there are hundreds of families who deal with cancer on a daily basis. I have seen several stories through out the month and I wanted to share my son James's story hopefully bringing a lil more awareness and put a face to all this talk about pediatric cancer. Feburary 2015 our life is that of a typical family, mom and dad work son goes to school raises a little mischief everything is "normal". Then getting James dressed for school one day I noticed a lump on the side of his neck. That was all it took for me to get him to a Dr. On our first doctors visit James was treated for swollen glands due to allergies. No blood work was done just a quick Rx fill and he's better right? Wrong after two weeks I spoke with a volunteer at the school who informed me that James was not eating his lunch. We noticed his cough growing worst and worst it got so bad we could not take it anymore we decided to take him to the emergency room. The ER doctor did not seem concerned and filled a codeine prescription for his cough and sent us home no CBC, nothing. We contacted our family doctor the next day as instructed and brought him in to be seen. The Dr was amazed at how big his tonsils where and was determined this was our problem. A abscess on his tonsil creating all these problems. Finally an answer. He set us up with a ENT and decided a shot of steroids would be beneficial. He told us to call if he gets a fever other than that he should be fine. We left that day thinking all is well. Of coarse we got home and later that night James got a fever. We called the Dr emergency line ,he said bring him in first thing in the mourning unless his temperature gets to high. Early the next mourning I showed up at the office well before the opened ready for answers hopefully. The Sr immediately saw us looked him over and was about to send us out when he said something I'll remember forever. " Let's do a CBC all should be fine. Unless it come back and his WBC is crazy high". Well sure enough it was through the roof. He said we needed to head to the ER so we could figure out what was going on. I rushed to St Joes Children's Hospital praying for an easy fix like it's always been. More blood work and scans. Chest scans neck scans you name it. Possible crazy case of Mono. Well in less then a month our son went from allergies to swollen glands to an abscess on his tonsil to possible whooping cough now mono. We wondered if we would ever get an answer. Well later that night we sat down with a hematologist who discussed possibilities but at this point I wanted definitely not possibilities. After a long sleepless night we finally had an answer. The Doctor say us down and said " I wish I had better news, your son has T cell ALL". First and only question I had was it curable once I had that answer I disappeared to pray. It's crazy that after all of that it took one Dr saying lets do a CBC, to quite frankly save my son's life. After his BMB we discovered his marrow was 96% Leukemia. We cannot put a definite time on how long he has had it but it could've possibly been two months. Why did it take so long. Other kids sometimes it takes longer to get diagnosed why. These are children our future and yet they sit and suffer until they get diagnosed. Then after that the real battle begins. Introducing poison into there bodies in hopes it works. Maybe? Maybe this will cure T Cell ALL but maybe it will develope a different cancer. Or here's some medicine it might work but it might also give u heart failure. Thank you for supporting me and the more than 300,000 kids worldwide who will be diagnosed with cancer this year. By sharing the gifts of your time, talent and money with the St. Baldrick’s Foundation, you're supporting research to give all kids with cancer a better chance for a cure.