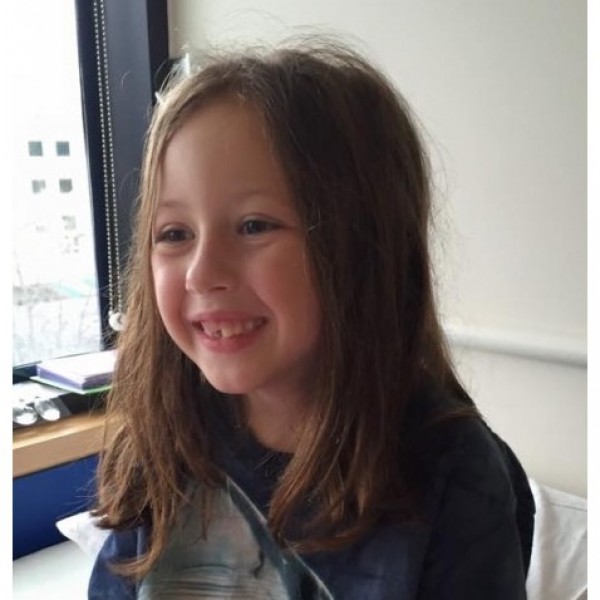 Thank you for supporting me and the more than 300,000 kids worldwide who will be diagnosed with cancer this year. By sharing the gifts of your time, talent and money with the St. Baldrick’s Foundation, you're supporting research to give all kids with cancer a better chance for a cure. Sadie was your typical 6 year old. Running, playing, wrestling until October 5, 2014. She had gotten off the school bus one evening and went directly to the couch which is unusual of her. I noticed her cheeks were flushed so I took her temp and she was low grade. So I really didn't think anything of it. Well a week went by and she continued to run fever so I contacted our pediatrician. Several labs were run which showed she was exposed to mono sometime in the past but the virus was not active now so our pediatrician told us to let the virus run its course and the fever will go away. In the mean time treat her with Tylenol and motrin. Well another week went by and sadie continued with fever. So our pediatrician admitted us to a hospital in Baton Rouge, La. There we saw a number of physicians due to Sadie's blood counts being low. She had a bone marrow biopsy which revealed abnormal cells but a disease couldn't be pinpointed. So the Hemonc doctors told us it was just a post viral bone marrow depression. We were discharged about a week later to follow up with them in two weeks. Sadie did well during these two weeks she did run fever on and off but I felt like she was coming around. After our follow up visits she started running fever again. So I requested we be admitted to Childrens in New Orleans. We also saw a bunch of doctors here including Hemonc, rheumatology, pulmonology, infectious disease, GI. Sadie had CT scan, Pet scan, bone scan, upper and lower GI, abdominal ultrasound, echo, chest X-ray, sinus X-ray as well as another bone marrow biopsy. Her cells still did not pin point a specific disease but the doctors felt strongly she had something called HLH. This all happened in January of 2015. But with HLH you have to meet very specific requirements so they couldn't give her that diagnosis at the time. So we were discharged and scheduled to follow up with these doctors every week. And we did. We have been in and out of Childrens twice since then this being our third March 11, 2014 and fourth bone marrow biopsy and spinal tap. Well finally her cells starting showing blasts and she was diagnosed with ALL on March 12, 2015 my husbands her dads birthday. So now treatment has begun. We will be here for at least a month and go from there.