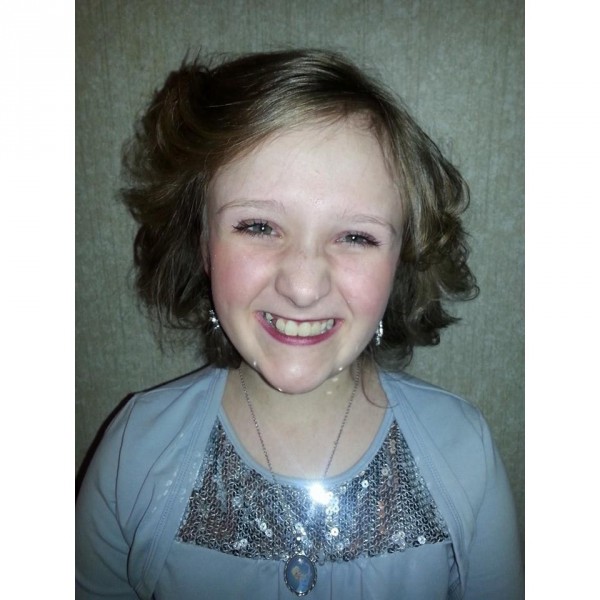 Anna Beth is 8 yrs old. She was diagnosed with Neurofibromatosis, NF1 for short when she was a toddler. NF can cause tumors to grow on different areas of the body or on nerve endings, along with cafe-aulait spots, they look like a lot of birthmarks of many shapes & sizes. Anna Beth has several cafe-aulait spots. Mom calls them sugar spots! Anna Beth has the NF1 checked yearly at UNC Children's Hospital. In June 2012, Mom noticed Anna Beth had a knot under her left breast, she had been really moody & had underarm odor. This was really strange for a 6 yr old! Anna Beth had two MRI's. Both MRI's confirmed that she had a Optic Glioma tumor in her eye nerves where they meet in June, 2012. We were told the tumor was malignant. The Optic Nerve Glioma is a rare kind of cancer usually slow growing and found in children. It is rarely found in individuals over the age of 20. It has also been associated with the genetic disorder Neurofibromatosis type 1 or NF1. Surgery was not an option because of where the tumor was located in her brain, she could loose her eyesight if she had surgery. She started going through puberty at 6 yrs old due to where the tumor was located in her brain. In Jan. 2013, Anna Beth started the Lupron Depot shot. She had to have the shot every 28 days in her bottom to slow down the puberty process. The 1 inch needle was so painful & put tremendous stress on her little body. Anna Beth was switched to the Supprelin LA implant. She had surgery to put the implant in her left arm in March 2013. The implant has to be replaced every year until she is 10 yrs old. July 30, 2012 Anna Beth had surgery to put in her Purple Power Port & she had her first chemo treatment afterwards. She was supposed to spend the night at the hospital that night but Anna Beth said she was not gonna spend the night there! She did so good, she got to go home that evening! We were told she was the first child/patient that didn't have to stay the night after a surgery & first chemo treatment! July 30, 2012 - Sept. 20, 2013, her chemo treatments were Carboplatin & Vincristine, 4 weeks on & 3 weeks off for a little over a year at Vidant Medical Center in Greenville, NC. Anna Beth has to have eye exams at Duke Eye Center every 3 months to check the optic Glioma tumor in her eye nerves. Nov. 2013, her visual fields test on her right eye showed it had gotten worse from the previous month. She had to wear a patch over her left eye for 2 hours a day to strengthen her right eye. The eye doctor said the tumor was sitting on her nerve tissue compressing, causing further deterioration. Anna Beth did so well with her chemo, she hardly ever got sick from her treatments. She had beautiful long blond hair that touched down to her hips. It started to get really thin on top, about a month into her chemo treatments. Anna Beth had her first haircut, cut up to her shoulders! We kept her 12 inch braided ponytail!! Dec. 27, 2013 - Dec. 31, 2014, Anna Beth had to start her second year of chemo at the James & Connie Maynard Children's Hospital in Greenville, NC. Her chemo treatment was Vinblastine, once a week for 1 year with a MRI every 3 months. Her MRI's have all shown that she is stable! Anna Beth's last chemo treatment was Dec. 31, 2014. She wore her Elsa dress from the Disney movie Frozen, brought to her by Elsa & Anna in the hospital. What better way to start off her New Year than to, "LET IT GO!!!!!!!!!!!" Anna Beth has to have monthly blood work & a MRI every 3 months & eye exams every three months. The oncologist said if he lined up all the MRI's side by side, you would not see any change from the beginning of treatment, because the tumor is so slow growing. Anna Beth had to have physical therapy once a week at Wayne Memorial Hospital for 7 weeks for her ankles and feet. Chemo made her ankles weak & her right foot turn in & give into the inside. Anna Beth has been through a lot in these past few years, but she always has a big, beautiful smile on her face with a sparkling personality to match! Anna Beth has been & continues to be so strong through all of this! She has a Facebook page called Standing with Anna Beth Sanderson. You have to ask to join her page. We couldn't have gone through this storm without our Lord & Savior, Jesus Christ!!! No weapon formed against us shall prosper in the precious name of Jesus!!! We thank Jesus everyday for Anna Beth's & Austin's healing! Thank you so much for your support, Kim, Chris, Austin & Anna Beth Sanderson