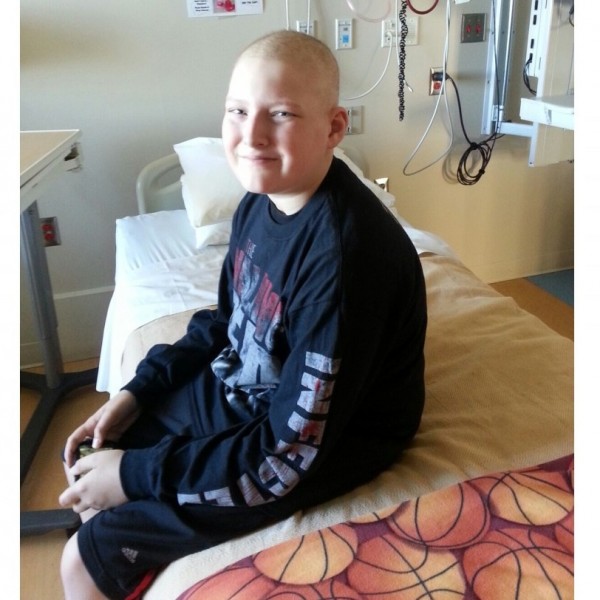 It was spring break of 2013 and all week Konnor sounded hoarse when he spoke. We thought maybe he was getting a cold or going through puberty. That Friday a lump appeared on his neck, it looked like a swollen lymph node. We were out of town that day and when we returned home later that evening it was decided that we should go to the ER to have it checked on. Understandably, there was not much of a diagnosis, so the following Monday we went to see his doctor. Konnor was given high dose antibiotics and we were told to come back Thursday to see if the swelling was subsiding. The swelling had not subsided so the doctor ordered a CT scan on Friday. On Friday we had the scan done and within an hour we were called to the doctor’s office to discuss what was discovered. Apparently, all of Konnor’s lymph nodes were inflamed or swollen. The doctor was noticeably uncomfortable explaining what he was seeing, but did not want to make an official diagnosis. We were referred to Sacred Heart Pediatrics in Spokane and were told not to get there immediately. Not a word was spoken by any of us as we drove, imagining the worst, hoping for the best. We reached the pediatrics department later in the evening and were given a room to settle into. The setting was very familiar to us because Konnor spent three weeks there as a newborn, in and out for the following nine months after receiving a tracheostomy to help him breath. Since then Konnor has been a picture of health, rarely even getting a cold. Konnor was immediately hooked up to an IV and the testing began. By 10:00 PM that evening the doctors were ready to give see their diagnosis. It was Leukemia. We were already scared and worried, and this news opened up a host of emotions that are reserved for people that are dealing with catastrophic events. It felt like our world was crashing in on us and we could not do anything about it. How could and eleven year old boy who is having the best year of his life in school and sports be, all of a sudden, stricken with a life threatening disease? The next morning Konnor was transferred to the Pediatric Oncology unit and we met his team of doctors. As you would guess, we were confused, worried, and our questions were mounting by the minute. Konnor was given high doses of steroids and chemotherapy, with the initial goal of eradicating the cancerous cell from his blood stream. His white blood cell count was more than ten times what it should have been; his immune system was working overtime and was not effective. Konnor should have been so wiped out that the doctors were amazed he was even able to walk. During his inpatient treatment, Konnor had visits from many friends and family members, who helped keep us all strong. With two weeks his initial treatments worked and the cancer cells were not visible in his blood stream. We were able to go home just in time for is twelfth birthday. The next seven months were geared towards attacking the cancerous T-Cells that were being produced in his bone marrow at an aggressive rate. We were making trips to the hospital on average of three times a week and sometimes every day to get chemotherapy treatments and he was put under every four weeks to receive a spinal tap and bone marrow test. Konnor was losing weight and visibly getting weaker by the day. It was hard to stay positive, but Konnor was determined to not let it get him down. The chemotherapy was working and his cancer cell counts were dropping every time he was tested. Our scariest moment was when Konnor had an allergic reaction to one of the treatments. He went into anaphylactic shock within ten minutes of starting the treatment. Without the quick response by more than a dozen medical staff, Konnor could have died. By the time school was starting, Konnor was gaining back weight and his strength was at least stable. He was getting ready for school to start and you could see the excitement in his face to see his friends and he was also allowed to join the football team to watch and learn. Konnor’s attendance suffered due to the intensity of his treatments, but he was able to keep up with homework when he was feeling up to it. By November, his bone marrow counts were at 0.01% down from 80% at the start. We were all hoping for negative results for his December test. After a month of more intense treatment, Konnor’s results jumped up to 0.03% and the doctor started discussing bone marrow transplant possibilities. We expressed our hesitation to jump into a transplant and keep trying with chemotherapy. Fortunately, his doctor was willing to go with that plan and the results were amazingly good in January. We received news that his counts were down to 0.006% to which the doctor expressed that she could not believe that they could be so precise. Konnor is now in maintenance, taking oral steroids and chemo, along with once a month chemotherapy infusions. This process will go on for two more years as long as the cancer remains in remission. Konnor’s strength and determination is nothing short of extraordinary. Even while in the hospital, he felt sympathy for the other kids not dealing with treatments as well as him. What Konnor has had to endure physically and mentally, required him to mature well beyond his age. Some believe Konnor gets his strength from his friends and family, but there is a case to be made that his friends and family get their strength from Konnor.