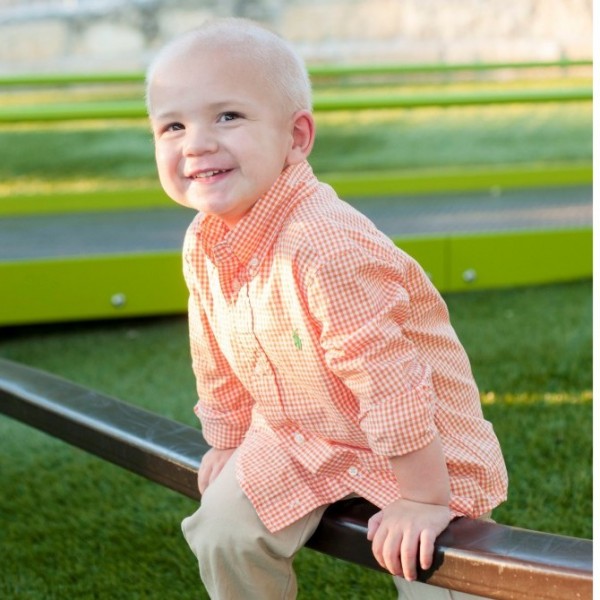 At just 18 months old, Rex Ryan was diagnosed with Stage Four Neuroblastoma Cancer. Since that day in September of 2013, he and his amazing family have faced each day ready to win, demonstrating courage and strength while fighting this disease. His many battles included seven rounds of chemotherapy, a stem cell transplant, 12 sessions of radiation and six rounds of immunotherapy. Since his diagnosis, he has spent more than 200 nights in-patient, predominantly at Dell Children’s Medical Center (their “home away from home,” for which they are so grateful). Rex also spent one month in Houston at Texas Children’s Hospital for his conditioning chemotherapy and stem cell transplant. He has had 14 surgeries and more than 50 blood transfusions during this time. Rex’s most recent scans in October and again in January continue to show no evidence of disease, conveying no cancer is present. He is an amazing fighter and Rexstrong is a more than fitting name to describe this happy little warrior. At Rex's side throughout his journey stand his fiercest supporters. His sister, Elle, keeps his spirits high, even when he feels under the weather, always showering him with love and humor. His dad, Casey, enjoys every second of fun with his little "cub" as he calls him, and he is steadfast in his strength and love for his little boy. His mom, Lesley, has been at his side through every step, documenting his journey through their posthope site so that the world may, too, marvel at the strength a little boy can have and the inspiration one child can provide for the masses. The Ryans are taking strides to eradicate the word cancer from our language, and they thank each supporter they've encountered for their efforts in their cause.