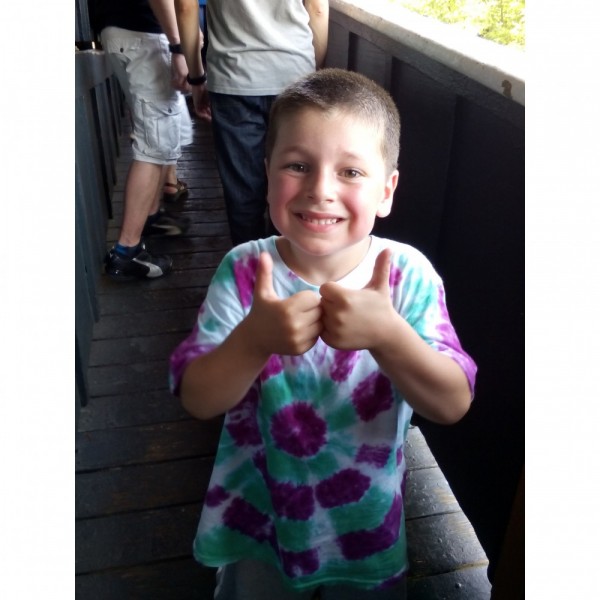 We had no idea Chris was sick. He and his big sister Maria had been fighting on the sofa and his sister accidentally kicked him in the face causing a black eye that lasted for 2 weeks. Two days after it went away his eye within 12 hours went from being droopy to completely bulging out of its socket. We took him to the eye doctor immediately who determined he likely had a fractured orbit from the kick. The next day we saw the ocular surgeon who sent us for a CT scan to confirm the fracture. On July 10, 2014 instead of a fracture he found a golf ball size tumor behind Chris' left eye.Chris had a craniotomy on July 15th to debulk what they believed was a benign tumor only to discover immediately that it was cancerous. It couldn't be fully removed because it was pressing on the brain, pushing on a large blood vessel, and was intertwined with the facial nerves that control facial muscle movement. On July 19th we were told he was stage 4 and had neuroblastoma. Roughly 600 kids a year are diagnosed with neuroblastoma and it is a very difficult childhood cancer when it comes to reaching remission.We transferred to Comer Children's Hospital at the University of Chicago on July 20th and it was the best decision we made. Chris' new team of doctors immediately enrolled him in a clinical study and began chemotherapy the next day. Because of their aggressive approach to treating him they were able to save his eye and eyesight.Since then Chris has undergone countless sedations for many reasons including scans and placements of a PICC line and then a central line which is a semi-permanent tube that goes right to his heart to administer drugs, take blood samples, and hook up IV lines. It minimizes GREATLY the amount of times he has to get poked with needles.He has endured 6 brutal cycles of chemotherapy. One of which caused him to vomit every 25 minutes for 24 hours a day for almost 2 weeks straight. The only relief he found was when he was asleep.The major side effects of these drugs include permanent hearing loss, heart damage, and infertility. He had surgery to remove his primary tumor which had enveloped his left adrenal gland leaving it nonfunctioning. He now only has one healthy adrenal gland.He participated in a clinical study called MIBG therapy which administered such a high level of liquid radiation that for the first two hours he had to be left alone in this special lead lined room and nobody was allowed to enter. After that we were only allowed in for minutes at a time over the course of 5 days. He was in a bed protected by heavy lead shields and his level of radiation was that of a live open microwave.  When he was released from the hospital after his MIBG treatment we couldn't be within 3 feet of him for any lengthy period of time for the first 2 weeks. His clothing had to be washed separately and the washer had to be cycled again empty in order to rinse out any contamination. He was only able to eat off of paper and plastic disposable items and any surface he touched was immediately wiped with bleach wipes in order to limit radiation contamination.He has experienced one seizure, multiple blood and platelet transfusions, a week stay in intensive care with a high fever for which no source was ever found, a stem cell harvest, and much much more.His hospital stays have averaged 2 to 3 weeks at a time.Chris wasn't able to enroll in school this year which he misses very much. Because of his compromised immune system he has been pretty much stuck in his house since July and has very limited contact with both friends and family. He hasn't been to his grandparents' homes since he was diagnosed.In March Chris will have a stem cell transplant and be in isolation for 100 days. 3-8 weeks of that will be spent at the hospital and at the Ronald McDonald house. The remainder will be at home. When he leaves the house to go for proton therapy during these 100 days he will have to wear a special respiratory mask because while germs at home pose a danger so do the mold, fungus, and spores found in nature.The last part of his treatment which will not be completed until the very end of this year is immunotherapy. Chris' own antibodies will be trained to attack any remaining cancer cells. This particular treatment is very painful and will cause him to miss kindergarten on average one week a month.This has been a most difficult time for all of us as a family. We have had to be separated so often and therefor we cherish every day that we do get to be home together.Chris had to spend his 5th birthday in the hospital. We made the most of it as we have done with every challenge up until now.Chris is a very active, happy and silly 5 year old. He loves his swing set, big wheel, and most of all his family, friends, and neighbors. On July 10th his life along with ours was turned upside down. He has a long year ahead of him but we are all ready to continue this fight with the strength and determination that Chris has shown us. Cancer is going to be so sorry that it chose to pick on him.  Thank you to everyone for your love, support and tremendous amount of help you've offered us all along the way. We couldn't keep our chins up without you. A thousand times, thank you.