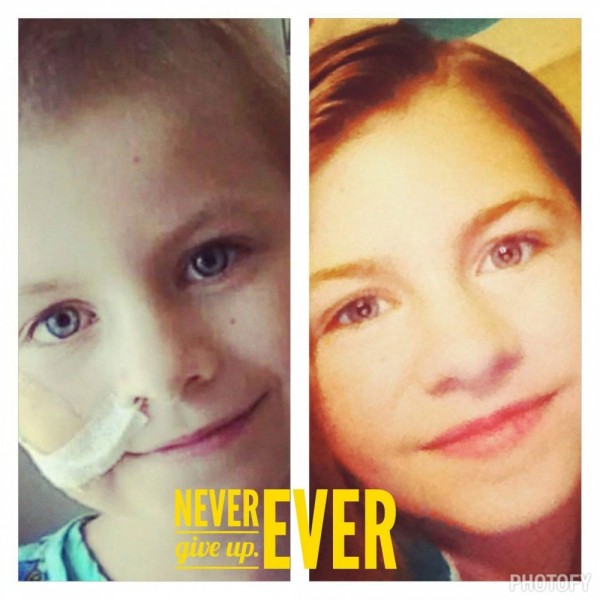 Thank you for supporting me and the more than 300,000 kids worldwide who will be diagnosed with cancer this year. By sharing the gifts of your time, talent and money with the St. Baldrick’s Foundation, you're supporting research to give all kids with cancer a better chance for a cure. Emily story starts when she was 7. In February 2010 she started having some blood when she went potty. We checked for a UTI or kidney infection, every thing always came back clear. We did this for a few months. went to a urologist, kidney specialist, endocrinologist. we were finally referred to a pediatric GYN, who on September 22, 2010 scoped Emily's vagina and found the source of the bleeding. A tumor. She was very concerned because what she saw was very rare for a 7 yr old. It was a Clear Cell Andeocarcinoma tumor, mostly found in older women. We were sent for MRI's, CT scans, and lots of labs tests. Since this was such a rare cancer the doctors had to find someone to help guide them in a treatment plan. We were sent to Sloan Kettering Hospital in NYC to meet with Dr Laquglia, he is a surgeon. He presented all of Emily's information to a tumor board, they came up with a plan to start chemo (cisplatin, and taxol). They were not sure how the tumor would react to the chemo, but it worked wonderfully. after 2 rounds her tumor shrunk by a 1/4, after 2 more rounds it was down by a half. Emily went into surgery on March 10, 2011 at Sloan Kettering, to remove the tumor, her uterus, top part of her vagina, and a sliver of her bladder. after 2 weeks of recovery we traveled back home to recover some more. In April she started her two final rounds of chemo and then on to radiation. We always seem to be traveling for the big stuff. We went to Barnes Jewish Hospital in St Louis to meet with Dr. Grigsby. He agreed to do Emily's Radiation. She started her ten days of intra-vaginal radiation the end of June. She did fantastic through all of her radiation. After she had fully recovered and we were cleared for travel we all accompanied Emily on her Make-a-wish trip to Disney in Florida. Disney was a magical place for the kids, and for us adults, too. Since Emily and her brother Sam had never seen the ocean we made a point to go to the beach on one of our days there. That trip was a time for us to all come together as a family again, to regroup. The last 4 years since she has been done with therapy she had had too many MRI's and Ct Scans to count. They all come back clear! Cancer Free! Emily will soon be 12, she plays the Saxophone in her 6th grade band. Since she was gone most of her 2nd grade year she has really worked hard to catch up with her classmates. She enjoys spending a week at Camp Quality every summer having fun being a kid. Thank you for reading Emily's story and we hope that you join us in the fight to cure Childhood Cancer.