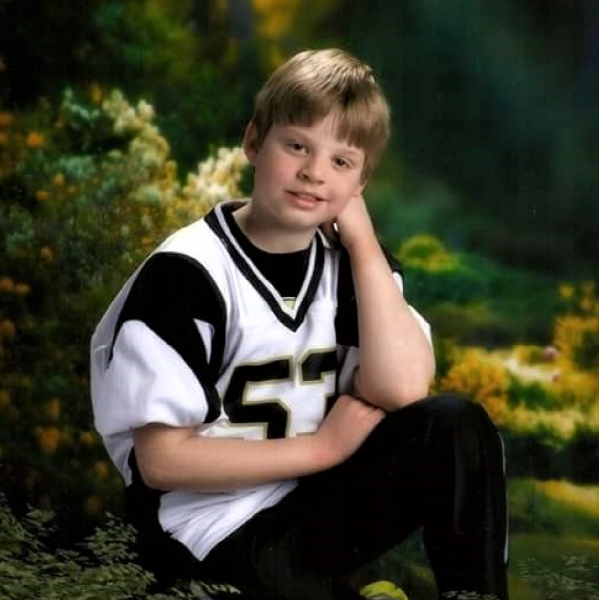 Brett was a sweet and fun-loving 14 year old boy. He was diagnosed with Anaplastic Astrocytoma grade 3 brain tumor in June 2014. He was the most healthy boy aside from headaches that started when he turned 11 the end of May 2014. He endured 7 weeks of proton radiation and chemo, then 10 months of chemo. His tumor was responding to treatment. Chemo was done Aug. 2015. The tumor showed signs of growing on the Nov. 2015 scan. He had a new MRI laser procedure to ablate the tumor in Jan. 2016. He Then had another laser surgery in April 2017 due to a fast growing recurrence.  He was in rehab for 2 weeks and a total 1 month hospital stay.  This surgery affected his Speech and communication. He began immunotherapy.  He was determined to get better.

He was a religious boy, attending Bishop DuBourg high school. He was priest for a day for his make a wish and joyfully served mass for the Archbishop. His heart was pure and he just wanted a chance to grow up.

TEAM BRETT 2022 has raised over $126,000 for St. Baldricks in the hopes that other children would not have to endure as much as he did.  Team Brett 2022 has helped fund a St. Baldrick's Research Grant that has been awarded to Dr. Josh Rubin at Washington University in St. Louis for his work on medulloblastoma, an aggressive grade 4 brain cancer. Dr. Rubin was one of the pediatric oncologists who treated Brett at St. Louis Children's Hospital, so this award has special meaning to us.

He fought for 3 1/2 years this monster brain tumor. It took his right-side leg and arm/hand function and speech. But it never took his faith, love and kindness. Before Brett became ill with cancer, I would tell him there was a special place in heaven for him. He was such a good kid. Brett took that special place in heaven at 9 pm on January 10, 2018. He is running in heaven free from all physical impairments and talking to all the kids. Cancer did not win, Brett won his place by Jesus being the special and caring boy he was. Remember to love and be kind to everyone. And love God with all your heart and soul. Like Brett.