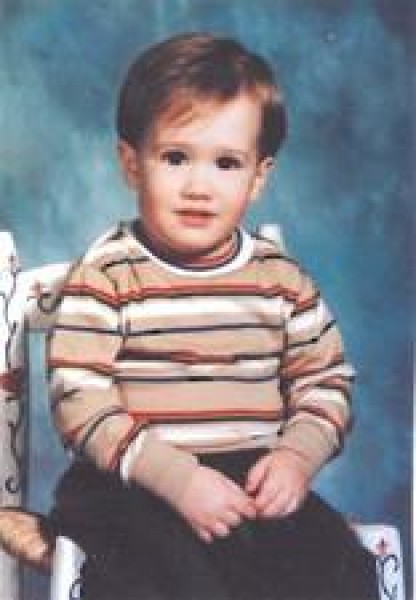 A message from Cameron's Grandfather: Cameron Thomas Gilligan was diagnosed with a Wilms tumor at two years of age when the undiagnosed mass hemorrhaged in his kidney. He died a year later at 39 months after a very tough year, much of it spent at Yale New Haven Hospital where the staff did everything possible first to save his life and then to help relieve the pain in his final weeks and days. The day before he died, the precocious Cameron was given the usual array of small gifts that his grandparents bought him for each visit to take his mind off of the many needles, surgeries (including colostomy), x-rays, and chemo sessions. This time, he really homed in on a shiny Kennedy half dollar and insisted on holding that in his little hands the rest of his last full day of life. When asked what he would do with it, he responded with a faith that his parents had nurtured so caringly, "I am taking it to Heaven with me and I'm going to buy baby Jesus a milk shake when I see him". That was Cameron, a great little boy with the heart of a giant. Cameron's pain levels were terrible and he literally drew down the Northeast U.S. supply of Oxymorphine during his final days in 1988, so much so that a DuPont official had to scour the country to assemble enough of this precious medicine. Letting his own family take off on a planned vacation without him, this very wonderful man stayed at his post a few days until he had assured there would be sufficient Oxymorphine to take this young boy through his final days and hours with reduced pain. In addition, DuPont did not charge for the medicine because they too had been so moved by little Cameron's pain-filled ordeal. It is touching that Cameron is still so fondly remembered and an honor to be associated with St. Baldricks Foundation's wonderful work for children with cancer. A message from Cameron's Father: On March 2, just a week ago, I wrote these words to a friend: So today, just as a year ago, I ponder the 'what ifs' for a few suspended, wandering moments - of how he might look as a young man, what influence he'd be making in his circles of interest, and what sort of profession he'd be aspiring to. One thing I wouldn't have to concern myself with though - and it's the most important of all - is whether he'd be loved. From the moment he could express his thoughts and yearnings he showed such an uncharacteristic awareness for the importance of everyone who came into his life - from his grandparents to the parents of his fellow daycare buddies, to the nurses who cared for him on the seventh floor of Yale New Haven Hospital. They each felt that when they were with him, they really, truly mattered to him - he touched them so. And his final words before that last deep sleep were a gift for all to treasure, revealing his essence - "I love everyone."