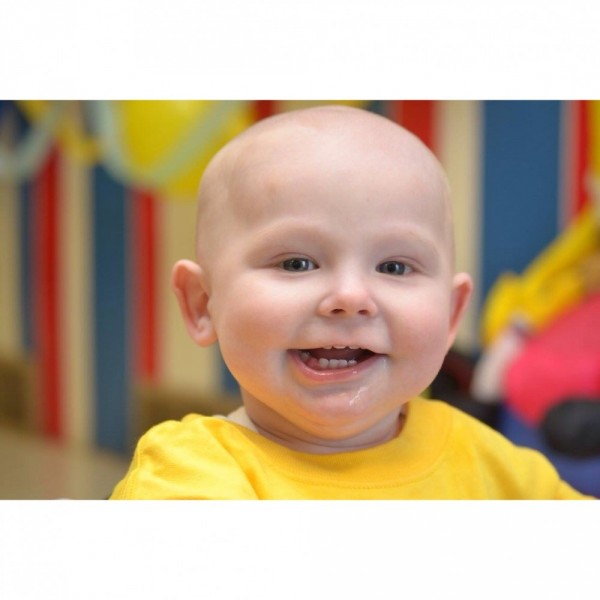 Thank you for supporting me and the more than 300,000 kids worldwide who will be diagnosed with cancer this year. By sharing the gifts of your time, talent and money with the St. Baldrick’s Foundation, you're supporting research to give all kids with cancer a better chance for a cure. Eli was born at Blessing Hospital in Quincy, IL on 11-13-13. He was a very healthy 6lbs 13.2oz baby boy! Normal delivery, no complications with anything. A week into being at home, I noticed a small bump on the back of Eli's head, I immediately called his pediatrician. After an appointment with her she sent us to a specialist in Springfield, IL at St. John's. That specialist then told us that it was a hemangioma, a birthmark that would rapidly grow and disappear by the age of three. Thank god, my baby was going to be just fine is what we all thought. Little did we know, he started to form bumps around his neck making it look like his throat might possibly swell shut, that ended in a trip to the ER, there we were told he had a cold, Tylenol and antibiotics and on our way. He stopped cooing, smiling, making eye contact. We knew something just wasn't right. We went back to the pediatrician who then admitted us immediately for tests. Her tests showed soft tissue in the neck. An ambulance ride to Springfield was next, after an MRI, x-rays, EKG, & a Biopsy of his bump on the back of his head, Dr. Brandt came in to tell us that our 3 month old little boy had cancer. We were Devastated. They let us go home that night and tell our family, with our son, just one last time before starting treatment. We went to be admitted to start chemo the very next morning. We were told he had Stage 2 Burkitts Lymphoma, a 7 week treatment and we would be home, living life the way we were before. Whoa, he now has an immune deficiency disorder, we were being transferred by jet immediately to Cincinnati Childrens Hospital in OH. 7 hours later Seth & I arrive, they started running all there tests and looking over everything from St. John's, only to discover that he did not have an immune deficiency, nor did he have Burkitts. Eli was finally diagnosed with Acute Lymphoblastic Leukemia(ALL). We have a two year chemotherapy plan. We spent 7 months of it inpatient in Cincinnati, we now are finishing treatment in St. Louis, MO at Cardinal Glennon Children's. He has been a rock star through everything! There have been quite a few bumps in our road, but we are a great team and we will NEVER GIVE UP! March 6th, 2016 will be Eli's very last day of chemo.