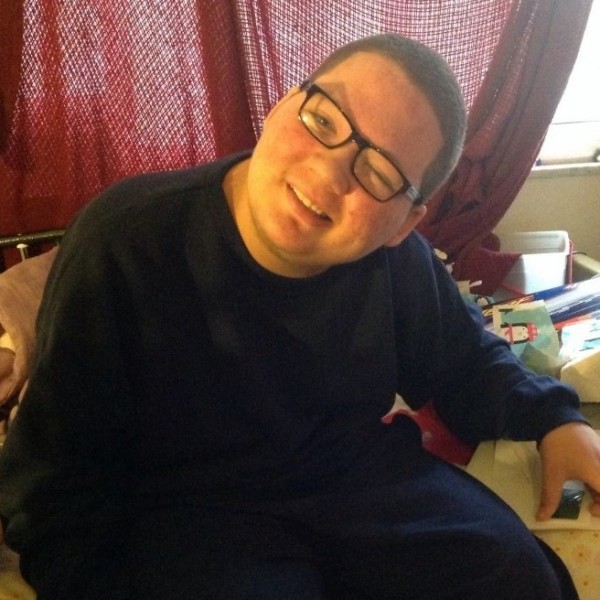 Thank you for supporting me and the more than 300,000 kids worldwide who will be diagnosed with cancer this year. By sharing the gifts of your time, talent and money with the St. Baldrick’s Foundation, you're supporting research to give all kids like Eli with cancer a chance to survive. I am a single mom of 4 teen sons and May 19, 2014 changed our lives forever! Eli collapsed on our living room floor in a major seizure. Luckily my at the time 14 yr old was there to help him. At 1:47 PM I received a text message from Dakota telling me that his brother was shaking and breathing funny and the cops were on their way I froze I was scared then ran into my place of work grabbed my items and flew home in fact I beat the ambulance there. Eli had three more seizures after I had gotten home and the ambulance rushed him to the hospital where he had another seizure his breathing began to labor and they had to intubate him. After doing a CT scan of his brain they found a large mass on his left frontal lobe that seemed to be about 2.2 cm wide. The following day they did an MRI which confirmed the large mass and also confirmed there was bleeding on his brain which caused him to collapse in the seizures. Eli also had a stroke which rendered his right side almost useless for about 4 to 5 days before the feeling came back. Eli remained in ICU for almost one week before they moved him to the 10th floor where Dr. Gabbernally came in to determine a date for Elis surgery. May 29, 2014 the doctor performed surgery to remove Eli's tumor and all had gone well. They did a biopsy on the tumor this was when we learned that it was cancerous and we also learned that it was called a high grade glioma 4 brain tumor. Eli had undergone radiation a total of 36 treatments five days a week with Dr. Guiou at 0SU hospital. He also did chemo therapy and all of his treatment ended in August 2014. Eli was doing well in fact he was thriving he was beginning to walk better talk better and perform better his scans all coming back as stable until he began to have complications on December 30, 2014 where he was throwing up and new seizures were coming about. They did another MRI scan which showed his tumor came back with a vengeance; not only was it located on the left side of his brain but it had also crossed over to his right side as well and was beginning to really make a mess of things in his brain! He began on steroids to control his vomiting and seizure meds to control his seizures. The doctors sent my son home with hospice as well as a death sentence of 3 months. The day we are born God counts every hair on our head and he already has our days numbered and planned out. He knows what we will do and when we will do it. He plans our birth and our death. On Valentine's day 2015, a day full of love and compassion, God took his FAVORITE Valentine home. At 10:20 am my ELI took his last breath and went home to be with God. There's only 4% of funds that go out for searching for a cure for childhood cancer! Your support is appreciated and needed so no more kids like Eli have to go home and wait to die! God bless and thank you for reading!