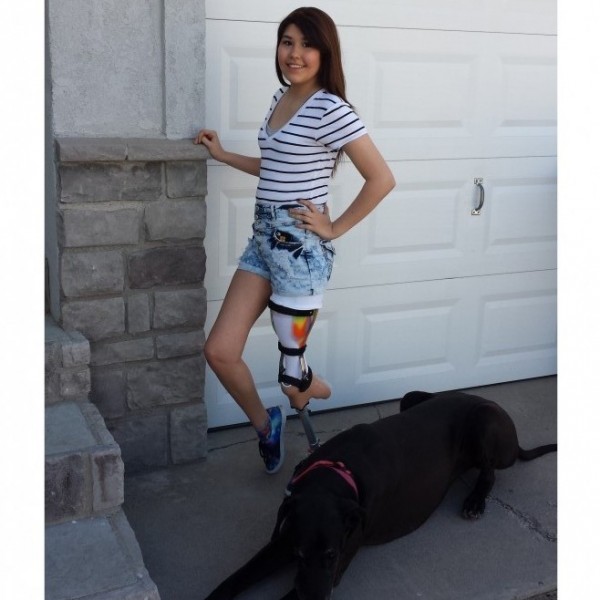 Janea Raylene Aguilera, was born into this world at 2:05 am, on 01/01/00 as the first baby of the NEW MILLENNIUM in Prowers County, CO. She was diagnosed with Osteosarcoma(bone cancer) on 04/30/12, with a pain in her left tibia. The cancer had already spread to both of her lungs, as well. Hearing the news your child has CANCER, was both shocking and horrifying! We did not have cancer on either side of Janea's family, so this hit us with complete shock! She had never been to the doctor for anything more than the common sniffles, and vaccinations. We traveled 3 hours from home to Childrens Hospital Colorado every other week or so... for the next 10 months for chemo, surgeries, and check-ups. She lost her hair within about 2 weeks of starting chemo, and handled that very well, and even had 2 of her closest friends that shaved their heads in honor of her. She had surgery to replace partial tibia and knee on July 18, 2012. This would leave her leg in a straight position, without ability to bend it for what turned out to be nearly a year. She also had lung surgery on Oct 25, 2012, to remove spots. After chemo ended in Feb 2013, we received news in March that her leg was not going to heal, and she would be faced with a difficult decision on whether to try and save it one last time, or amputate it. She chose to amputate, mainly because she was so tired of not being able to use her leg at all. To try and save it, would be nearly another year before we even knew if it would work. She was ready to get on with her life. She went with a procedure called a Rotationplasty. This would take out all the knee, and tibia that had been replaced, and turn the bottom of her leg(including foot) 180 degrees, and facing backwards! Then attach this to the bottom of her femur. This would allow the ankle to now act as a knee. Her surgery was in May to have this done. And from there, she did awesome!! She had a couple months before scans again, and then we found out her cancer had returned to her lungs. She had another surgery to remove spots in right lung. She now would be one trials , since this meant the cancer was very aggressive to come back so fast. She had 2 different trials that both had horrible side affects for her!! We tried all kinds of natural products also, everything we learned that might help. Then in March 2014, the cancer spread to her brain. This was not common for Osteosarcoma, but it was indeed true life for Janea. She had surgery to remove a large tumor, and radiation to remove 2 more smaller ones immediately. But this would only give her a few more weeks. Then it came back 5 weeks later, and she then was told she would only have a couple weeks to live. She accepted it, we all cried for hours, but she was strong and brave and she started thinking of all the things she would never get to do...start high school, date, and especially go to PROM. So her big brother heard this, and decided with our local Prom only days away, he was gonna see if he would be allowed to take her, even though he graduated the year before. The community found out, and people everywhere were helping to make it happen for her. Her brother took her to her only Prom, where she was even crowned Prom Princess!! And that was the last great night she had! The next morning she awoke with the worst pain in her head that she had ever had! And nothing helped!! Hospice came in, and she left us the next morning, in her sleep, very peacefully on 4/28/14. We are so so greatful for that!! She touched so many lives, and still does! Over 1500 people attended her funeral, including 2 of the Denver news stations. She will forever be loved and missed by so many people! Cancer taught us a lot! But it also took a lot from us.. it took our only girl, so beautiful and strong! She had so much laughter, and was truly so happy and silly all the time! She was the perfect friend, child, and Prom Princess!! Our lives will never be the same without her. WE MISS OUR PRINCESS EVERY SINGLE DAY!!!